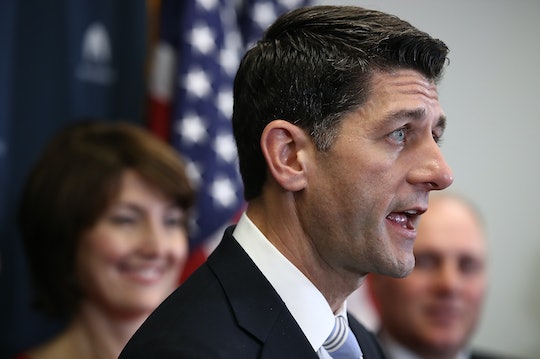 Dear Paul Ryan: Birth Control Saved My Life, & Here’s Why I Need Continued Access To It

In the days before President Obama's Obamacare plan took shape, when picking up your prescriptions cost the same as the bill after a fancy birthday dinner, I knew tons of people who would share their spare birth control pills like sweaters. I never participated in these pill swaps (though I always shared my clothes). That's because I need every single one of my birth control pills, since the medical condition I use them for has nothing to do with preventing me from getting pregnant.

When I was 27 years old, I was diagnosed with premature ovarian failure (POF), which means I can't get pregnant naturally and my body is in premature menopause. This means that while I don't look like there's anything wrong with me on the outside, I don't ovulate or get a period (regularly or at all), and my estrogen and progesterone hormone levels are about the same as my great-grandmother's. Taking daily birth control pills provides me with the hormone replacements that could very well be saving my life. Which is why I was utterly terrified when Speaker Paul Ryan recently implied that in the near future, birth control might not be covered by healthcare plans at all.

Whether you think Obamacare is the best thing since Seamless or that it needs to take a step to the left, there's no question that it has made birth control far more accessible for women. In fact, the cost of most forms of contraception are completely covered under Obamacare.

Today, however, Obamacare is in grave danger, with President-elect Donald Trump vowing to repeal Obamacare and replace it with a new healthcare plan of his own. And even though he now appears to be open to the idea of keeping certain elements of Obamacare in place, he has failed to publicly address what will happen to birth control under his new plan. Women across America are so fearful of what the future holds that many are rushing to get long-acting reversible contraception (LARC) methods like IUDs, just in case their access to birth control is compromised in the future.

On Sunday, House Speaker Paul Ryan addressed the topic during an interview on CNN. His words were far from comforting for women who rely on hormonal contraception, either for birth control or for their health. When CNN host Jake Tapper pointed out that many women pay nothing for birth control under the Affordable Care Act, he asked Ryan if that was likely to change. “Look, I’m not going to get into all the little nitty-gritty details of these things,” Ryan snapped.

Thanks to the pill's hormone boost, my last bone density scan showed that I'm maintaining normal levels. Best of all, my heart is still healthy. So what Ryan calls a "nitty gritty detail" is giving me the ability to live my life free from pain and worry.

Ryan may think birth control is a "nitty-gritty detail" under Obamacare, but women like me certainly don't. For those who rely on hormonal contraception for chronic health issues that have nothing to do with preventing pregnancy, his lack of concern over the issue is really worrisome.

I've been on one form of the birth control pill or another since I was 16. Since the Patient Protection and Affordable Care Act (PPACA) was signed into law by President Obama, I haven't had to worry about how I would afford the cost of my medication, as it's free under my insurance plan.

If I don't take birth control or any sort of hormone replacement therapy, I'm at risk for night sweats (imagine waking up every night thinking you peed yourself), hot flashes (I can be standing in the snow wearing only a t-shirt and feel like it's noon at Burning Man), migraines, mood swings, lowered sex drive, and vaginal dryness (it's like a coin purse full of sand, I kid you not). I'm also at high risk for bone loss, osteoporosis, and premature heart disease.

But by taking my birth control pill every day, exercising, and investing in some really good lube, I'm able to lead a healthy, normal life like anyone else my age. In fact, thanks to the pill's hormone boost, my last bone density scan showed that I'm maintaining normal levels. Best of all, my heart is still healthy. So what Ryan calls a "nitty gritty detail" is giving me the ability to live my life free from pain and worry.

Premature ovarian failure is serious, but because birth control manages my symptoms so well, it doesn't affect my life on a day-to-day basis. There are other possible treatments for my condition. Women who undergo menopause in their 50s, for instance, have the option to take hormone replacement pills to deal with the side effects. But finding the correct dose of hormone a woman needs can be tricky; it can take months or even years of tinkering with the dosage to get it right. Many of these drugs also have terrifying long-term side effects. Take, for instance, Prempro, a drug used for hormone replacement therapy for women undergoing menopause that has been shown to increase the risk of Alzheimer's Disease in women 65 or older.

Although I don't use birth control pills as a contraceptive method, I gain the same thing that every other woman does from taking it: freedom.

Under a President Trump administration, I could lose access to my birth control pills, which would mean having to change my medication. That could have some very serious consequences for my health. I shouldn't be forced to put my health at risk when the birth control pill is a safe alternative, simply because the incoming administration has a not-so-hidden agenda to police women's bodies.

Although I don't use birth control pills as a contraceptive method, I gain the same thing that every other woman does from taking it: freedom. Taking birth control pills to manage my POF gives me the same body autonomy as a woman who takes them to avoid an unwanted pregnancy. Having that control over my own body isn't a "nitty-gritty detail." It's everything.

More Like This
It's A Beautiful Day In Jenny Slate’s Neighborhood
Ginger Zee Had A Perfect Response After A Troll Asked Her "Who's Raising Your Kids?"
35 Relatable Quotes That Prove Being A Mom Isn’t Easy
The FDA Is Warning Parents To Not Use Baby Neck Floats After One Infant Died