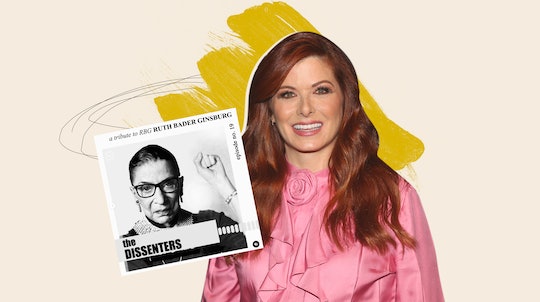 'Just Help The Helpers:' Debra Messing On What To Do When You Feel Powerless

Debra Messing was taking a break at her piano when she got the call from her best friend and I Am A Voter founder Mandana Dayani. Justice Ruth Bader Ginsburg, the pair’s personal hero and inspiration behind their podcast The Dissenters, was dead. Messing knew this day was inevitable, but the pain and the shock were nevertheless overwhelming. “I felt like all the air was sucked out of my body,” she says. “I could not believe it.”

Reeling, weeping, and heartbroken, Messing did what many of us do in times of crisis — she hopped on FaceTime with her friends, Dayani and Sophia Bush, and had a cry… and some booze. (“Sophia grabbed some wine. I grabbed some tequila.”) After a weekend of mourning, Messing started planning a special episode of The Dissenters to pay tribute to Justice Ginsburg, available now on Dear Media and Apple podcasts, creating space to honor her legacy and mourn her passing.

The Will and Grace actress’ first memory of the Justice is tied to her own cultural background. Like Ginsburg, Messing was born in Brooklyn into a Jewish family. She recalls this shared heritage (diligently fostered by her parents throughout her life) being a source of pride when RBG was confirmed as the first Jewish woman on the Supreme Court. “When she ascended, she was this diminutive little person; it felt like progress,” she recalls. “I was raised with my parents saying, ‘You have to have more than two children because we have to make up for the six million Jews that were killed.’ To go from that conversation, about the extermination of Jews and the hatred of Jews to the reverence of not only a Jew, but a Jewish woman, was really, really impactful and important.”

RBG inspired more than just the name of the podcast. Her persona, an inimitable public figure who said “no” to the limitations society would have imposed on her, is pivotal to the premise of The Dissenters, which premiered earlier this year. Messing and Dayani, self-described “super-nerds,” interviewed 20 of their heroes — all people who, like Ginsburg, chose to “dissent” from a prescribed path and to blaze their own trail. Guests have included Hillary Clinton, Jane Fonda, Lena Waithe, Jameela Jamil, and Adam Schiff. Messing had hoped that, one day, Ginsburg would join them. “It feels like a profound loss for women,” she says.

It’s almost certainly not a coincidence that many of the guests on The Dissenters are activist-entertainers. Looking at Messing’s Twitter feed, one would never guess that the actress best known for Will and Grace wasn’t always political. Her social media is strategically and intentionally used as a tool to fight the Trump administration, support Democratic candidates, and promote progressive causes. Her political opinions have even earned her an angry tweet and insulting nickname from Trump.

Her parents raised her in a tradition of social justice activism and the idea that it was her responsibility to give back, but she wasn’t always political. She became committed to HIV/AIDS activism when her favorite acting teacher died of complications from AIDS in the early '90s. Her only son, 16-year old Roman, is named in his honor. Her teacher also inspired her to do what she calls her “soul work” as a global HIV/AIDS ambassador with Population Services International (PSI) in 2008. In this role she embraced a more political activism, lobbying Congress for funds on behalf of the organization.

“I’m not a Congressperson,” she said recently in an interview with Entertainment Tonight, “but as someone who is a public person I was given this platform that’s a privilege, and I really try to use my platform for good.” On her trips to Washington to lobby for PSI funding, she says she took comfort in knowing that Ginsberg was just a building away at the Supreme Court, fighting. “She fought for women, she fought for gender equality, she fought for racial justice, LGBTQ, all of it.”

In the wake of the Justice’s death, Messing is not bereft of hope, but with conservative judge Amy Coney Barrett poised to fill the vacancy left on the Court, she admits that she fears for the future, especially for marginalized people and women. “​I look at my girlfriend's daughters and I mourn for them,” she says.

Look around and to see the people who are doing work, that resonates with you and just help the helpers. You don't have to be in the front of the pack.

She encourages everyone who feels powerless to focus on what they can do rather than on that which is beyond their control. “Look around and to see the people who are doing work, that resonates with you and just help the helpers,” she says. “You don't have to be in the front of the pack.” Sometimes, small actions — a small monetary donation, a day of volunteering — can make a difference. Messing shares that she and Roman have been writing postcards on behalf of the Biden campaign. She notes that there are organizations out there with know-how and infrastructure in place to effect positive change.

Messing knows that a post-Ginsburg world was bound to happen, even though the barbell-toting, planking 87-year-old cancer survivor seemed as though she would live forever. But the legacy of the Notorious RBG, she hopes, will prove immortal through those she inspired. “She was the person that we knew was sitting up there holding that space and protecting us,” she says. “And now my prayer is that the next democratic president ... will be able to find someone, the next RBG, that my son and his peers can grow up hearing the way that I grew up with hearing RBG.”