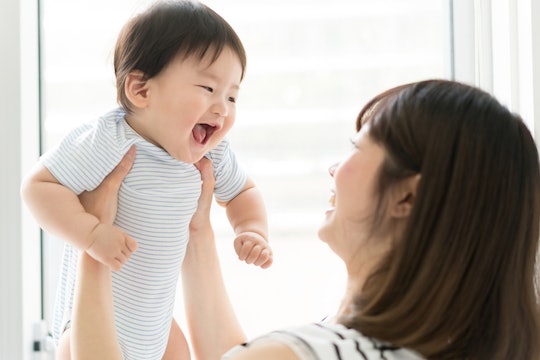 Babies Make A *Lot* Of Noise, But Here's How To Decipher All Those Babbles

My favorite sounds in the world are all the hilarious noises my son makes. He loves to blow raspberries, and up until recently, he was always saying, "Oooooohhhhh." Now he likes to say "Mamamamama," much to my delight, and "MMMMmmmm," when he really loves his food. Sometimes he grunts and makes noises at me and cocks his eyebrow like he doesn't understand why I don't know what he's saying. But deciphering baby sounds is tricky. I don't want my son to think I'm a moron, but I would also love to know what his little baby brain is thinking and needs.

While many parents report that they can “appreciate the different nuances in sounds baby makes" — like squealing typically means happy, chuckling means they think something is funny, sighing means they're relaxing, grunting means they're probably pooping, etc. — when it comes to different needs, Dr. Catherine Gritchen, a pediatrician at MemorialCare Medical Group in Long Beach, California, says there isn’t a universally recognized pattern. “The noises babies make are pre-verbal ‘practice.’ It’s all on the continuum of speech development,” she tells Romper in an email interview.

As far as if babies think you know what they’re saying when they aggressively say, “Baaa, baaa, baaa,” and look expectantly at you , Gritchen admits that she doesn't know of any research that answers that. "I think it would be quite difficult to determine.” In fact, a baby’s concept of language until they’re about a year old is constantly evolving and progressing, and it’s “quite variable from child to child,” according to Gritchen. "Their understanding, or receptive language, develops ahead of their expressive language.”

But all of your favorite little babbles don't necessarily mean your baby is trying to tell you something specifically. Dr. S. Daniel Ganjian a pediatrician at Providence Saint John’s Health Center in Santa Monica, California, says, “Babbling is simply repetitive sounds. In the first few months, babies coo (which is babbling of vowel sounds). At about 6 months, they start babbling with consonants.” Every baby’s sounds are different, and they aren't exactly trying to tell you anything when they make those sounds.

But you can still talk to your baby like they are chatting with you. "Communication with parents helps build the child's language and reinforces the parent-child relationship. Before 6 months, you can babble with your child. By 6 months, it is better to switch from babbling to speaking words to help your child's language improve,” Ganjian says.

With all that babbling, most of the time, baby’s first words are either “Dada” or “Mama.” From what I’ve been told, most babies say “Dada” first, no matter who the primary caregiver is, much to mom’s dismay. But is there any truth to that? “Generally, most babies do say ‘Dada’ first, but saying ‘Mama’ first doesn’t necessarily ‘mean’ anything," Gritchen says. "Many people feel Dada is an easier sound to produce, but there is debate among linguists. Another developmental theory is that infants tend to not appreciate mama as an independent person, but rather, a part or extension of themselves.” Um, how cool is that? I think someone is cutting some onions in here.

But should you be concerned if your baby isn’t really making any sound? Ganjian says yes. “Children that babble and respond to sounds in the environment do better than children who do not babble. If your baby does not respond to various noises or babble at all, let your pediatrician know to check your child's hearing,” he says.

Ways to build your child’s speech and language skills include reading to them from infancy, having conversations with them, and making eye contact. “Eye contact is an important aspect of language as it shows the listener that you care and are focused on them,” Ganjian adds.

But the universal sound that every baby everywhere makes? Crying. Certain cries do mean certain things, but it depends on the baby, and parents have to learn their different cries to determine what they need. And unfortunately, the first three to four months are the hardest when trying to determine which cry goes with which need, Ganjian says. But abnormal cries are something to be in tune with. “A cry is abnormal if it is accompanied by other abnormalities, such as weight loss, recurrent and projectile vomiting, bloody stools, or seizures. If your child slept well, has a clean diaper, and has not eaten for two or three hours, then your child's cry is most likely a hungry cry, which usually starts as a whimpering. To double check, tickle the upper and lower lips on the right or left side. If your child turns his head to that side, that confirms the fact that they are hungry,” he says.

Ganjian adds that a colicky cry and a pain cry are very similar, but “if your child starts to have a high-pitched, very loud cry after 4 months old, and your child is not tired, hungry, or dirty, then speak with your pediatrician. Many colicky babies do cry for more than three hours per day. If the crying gets close to two or three hours, make sure the child has nothing else wrong with them by having your pediatrician examine the baby."

All babies are different with their babbling and “sounds,” so there is no one universal answer for each type of noise your baby makes, other than the more common sense-type sounds. The most important thing to learn are their cries and their cues, because only you will know exactly what each noise means — you know them best. Just trust your instincts.

More Like This
30 Adorable Baby Halloween Costumes, From Animals To Avocados
13 Gorgeous Baby Girl Outfits For Fall
Are Babies Lonely In The NICU? Here’s What Experts Say
How To Get Boogers Out Of A Baby's Nose