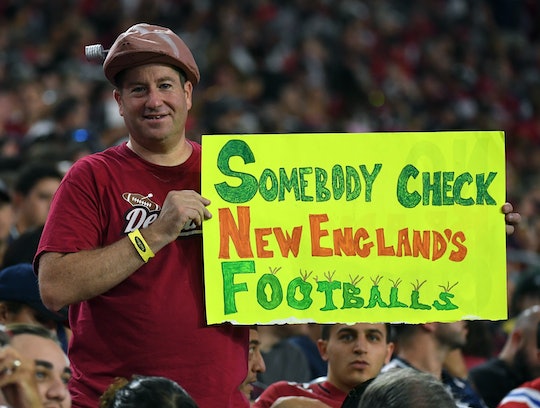 Super Bowl 51 Deflategate Memes, Because Why Not

OK so we get it; people are still mad about Deflategate. Sure, it happened two years ago. And yes, a whole bunch of other things have gone on since then that seem more... I don't know. Relevent? It doesn't seem to matter, though, because Deflategate memes from Super Bowl 51 are continuing to make the rounds. At least some of them are decently funny, right?

If you don't know the story of Deflategate, here's the deal; two years ago, New England Patriot quarterback Tom Brady was accused of intentionally and improperly deflating footballs before the 2015 AFC Championship, according to ESPN. He was suspended for four games, which is a big deal when you're Tom Brady (I would have been like, thanks for the holiday, Jamaica here I come). What ensued was 18 months of accusations, legal battles, and serious investigations. Brady eventually threw in the towel and accepted four-game suspension. Then he should have been able to go on with his handsome life, right? Like, just let the guy enjoy being married to Victoria's Secret supermodel Gisele Bündchen and revel in being awesome at football. But nope; nobody is ready to let this one go. Especially when Atlanta Falcons offensive coordinator Kyle Shanahan lost their playbook for a brief period before Super Bowl 51, according to CTV News. Everyone was all, "Oh I bet it's that dastardly Tom Brady again." Except nope; some Bay area reporter grabbed the wrong backpack. And with that simple mistake, Deflategate memes became part of our lives again.

And bringing the Peanuts gang into it? Oh, brother.

Me? I like the ones where Brady looks handsome and is looking right into my soul.

How do we feel about getting political?

OK so this one? I'm sharing only as a cautionary tale — let's all say no to puns, shall we?

Some people supported Brady, and were grateful to the judge who freed him (he was never in jail, so I suppose they just mean freed him from abject persecution maybe).

Here's my take on Deflategate memes — let it go. Accept that Brady is just good at throwing footballs and making sure the guy on the other end catches them. Accept that he's going to keep doing his job because his boss likes him, I guess. There are so many issues out there that are far more meme-worthy than Deflategate. Do yourself a favor. Move on.