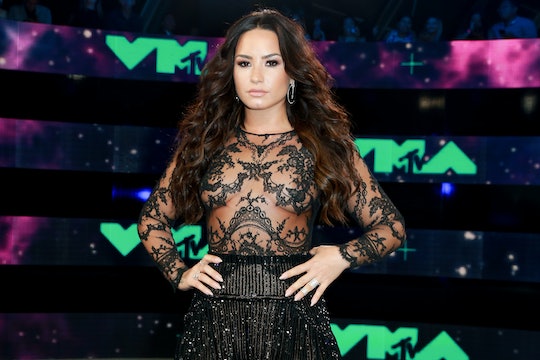 People Keep Asking Demi Lovato About Her Sexuality, & She Is Not. Having. It.

Ever since singer Demi Lovato was spotted holding hands with DJ and producer Lauren Abedini this summer at Disneyland, rumors have been swirling that she's bisexual. She also said that her single "Cool For The Summer" is about bicuriousity, has a huge LGBTQ, and is a dedicated LGBTQ rights activist. With all of that info, as you can imagine, her fans and the general public are just dying to know the deets about her sexual orientation, yet Demi Lovato won't confirm whether she's bisexual or not. What a terrible thing to do, right?

Kidding, kidding. Actually, the more people ask Lovato about whether or not she wants to comment on her sexuality or her love life, the more apparent it should become to everyone that she has no obligation to talk about any of that at all. Seriously, leave the woman alone.

Yet she keeps having to politely turn the conversation back to the important things — like her new album. On Friday for example, she gave an interview with Pride Source and said that she isn't opening up about her personal life because, well, she doesn't have to. “I just feel like everyone’s always looking for a headline and they always want their magazine or TV show or whatever to be the one to break what my sexuality is," the 25-year-old said.

I stand up for the things that I believe in and the things that I'm passionate about, but I like to keep my personal life as private as possible when it comes to dating and sexuality and all that stuff just because it has nothing to do with my music. Unfortunately, we live in a world where everyone is trying to get that soundbite and I am purposefully not giving the soundbite.

Coming out is a personal thing to do and no one should be forced to talk about their sexuality if they're not comfortable doing so. In this social and political climate, it's easy to understand why people would encourage more LGBTQ identifying people to come out and share their story. The more the merrier, right? But it's not up to anyone to tell someone, even a celeb, what they should talk about in public.

And it's not like Lovato isn't already an advocate for the LGBTQ community. She won GLAAD's Vanguard Award in 2016 and cancelled events in North Carolina last year in the wake of the state's anti-transgender bathroom bills. She's also politically active on social media. When, and if, she talks about her own sexuality should be up to her.

She said as much in her interview with Pride Source, noting that she has a documentary coming out in October on YouTube called Demi Lovato: Simply Complicated that might answer some of these questions fans have about her sexual orientation. "Because if ever I want to talk about it, I want it to be on my own terms," she said.

The documentary is also about her own mental health, which is something Lovato does talk about often and openly. Lovato also produced a documentary called Beyond Silence for Be Vocal, a mental health awareness organization, that follows three people, Jeff Fink, Lauren Burke, and Lloyd Hale, and their respective experiences with bipolar disorder, schizophrenia, and depression.

Lovato told Variety of their stories:

You can hear in the documentary how different they are, but also how alike they are. It’s important that we get that message out there because mental health is so important — it’s just important as physical health.

So, Lovato fans: You're going to have to wait to hear from Demi herself about her love life and sexual orientation. But given how open and vulnerable she is about everything else in her life, give the woman some space and just enjoy her music for now.