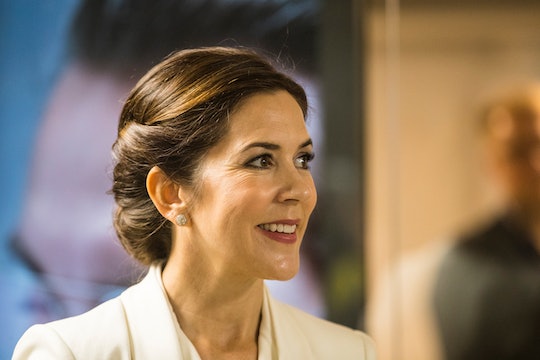 Ever since the British monarchy realized it needed to change with the times, the Windsors have evolved. From becoming a bit more accessible to princesses, such as Eugenie and Beatrice, who have normal jobs, today's royals honestly don't seem very different from you and me. Other noble houses are getting in on the "regular person" act as well. Denmark's Crown Princess Mary pulled a Kate Middleton by photographing her royal kids herself — forget an official court photographer.

As E! Online reported, Princess Mary is a native of Australia. Married to Crown Prince Frederik, 50, next in line to the Danish throne, the princess has published some new and ultra-casual pics of her twins, Vincent and Josephine.

Instead of perfect lighting, formal clothing, and a castle setting, though, Denmark's royal twins celebrated their 8th birthday much like many other kids around the world... in casual clothes, outdoors, and with their paparazzo mom behind the camera.

"Today Prince Vincent and Princess Josephine fill eight years, and on the occasion of the birthday, the Crown Princess has the joy to share a series of new pictures of their royal highnesses,” the Danish royals' official Instagram account captioned the post, per People and Instagram. This sounds much like Kensington Palace's wording when Princess Kate snaps the official pics of her own kids that are then shared with the public.

The Danish monarchy, headed by Queen Margrethe II, according to the family's official website, is one of the oldest royal traditions in the world, going back over 1,000 years.

The website noted that in 2009, Denmark's laws were amended so the oldest heir, regardless of gender, would inherit the throne — another commonality with Britain's decision around the same time (finally enacted in 2013, according to the Daily Telegraph) to change ancestral traditions in which only the eldest boy would take over in a reigning family.

As Hello! noted, though, Crown Prince Frederik and Crown Princess Mary's brood of four kids begins with Prince Christian, 13, (followed by Isabella, 11, and the twins) so I guess, much like William and Kate, with George as their firstborn, Frederik and Mary wouldn't have had to worry had the succession laws not caught up with modern times.

The princess — a brunette who was born a commoner just like Middleton — also feels the need to recycle her royal wardrobe, as royal-watching social media accounts show her use of one gown at least three times.

Princess Mary, who has shot photos of her kids before this as well, isn't the only European noble to try to appear as approachable as Middleton; Crown Princess Victoria of Sweden broke with royal tradition in 2016 to take the first official pics of her son, Prince Oscar, according to Hello!

The Crown Princess of Sweden has also snapped her kids and husband on a summer holiday, according to the magazine. Not bad "normal mom" skills for a parent who will also someday rule her country, as E! Online confirmed.

And while Kate's photos may be slightly more professional than other non-professional photographer moms' (she did study art history in college after all, People noted), these photos from Crown Princess Mary show that royal moms are just regular moms like you and me — capturing as many memories of their kids growing up as they can, while they still can.