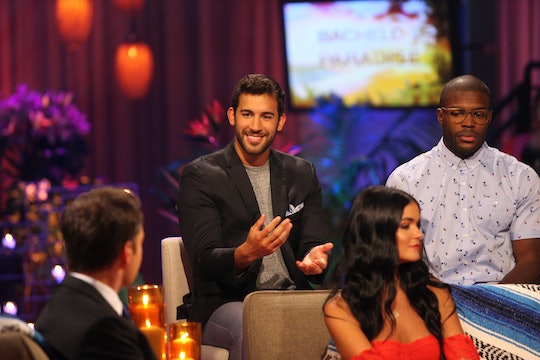 Derek & Taylor Made An Important Breakthrough On 'Paradise'

Relationships on Bachelor in Paradise are not unlike flurried middle school relationships. One day, they get together and are in love — the next they blow up due to one snide comment. This may be due to the fact that it's filmed in under three weeks, but I digress. On Monday's episode, one couple I thought was ride or die, Derek and Taylor, had a fight due to two words Derek said. Taylor was triggered and, just before a rose ceremony, Derek realized he was in the wrong. Derek apologized to Taylor on Bachelor in Paradise and it was pretty heartfelt.

Why did Derek even need to apologize? It started when he and Taylor were having a conversation about how they react when they're annoyed with each other. Taylor, a mental health counselor, is obviously pretty observant. She said that she was worried because Derek doesn't communicate when he's upset. To that he responded with a very mature, "f*ck you." Taylor was triggered because of a past experience she had where a partner would curse at her, and she pretty much shut down. Derek tried to console her (well, he asked for a kiss which was... not a good look), but it was clear she didn't want to talk anymore that night.

Even the next day, Taylor and Derek didn't make up right away. They talked about it with their respective friends instead of each other. Taylor told Dominique she was emotionally drained from the whole thing, while Derek tried to explain his side to the other men — who were not on his side. Derek was nervous going into the rose ceremony, saying that if Taylor didn't accept his rose that there may not be a point to him remaining in Paradise.

Thankfully, though, a crisis was averted. Shortly before the rose ceremony, Derek seemed to come to his senses about the fight (shocking that it happened right before the ceremony). To his credit, however, the apology sounded very sincere and respectful of Taylor. He didn't realize she was in an emotionally abusive relationship before and didn't know what her triggers were. Taylor gladly accepted his apology, and, while the rose ceremony won't air until Tuesday, it's safe to say they'll remain together. Will Derek and Taylor be the Evan and Carly of this season's Paradise? So far, it's looking like they could end up that way.