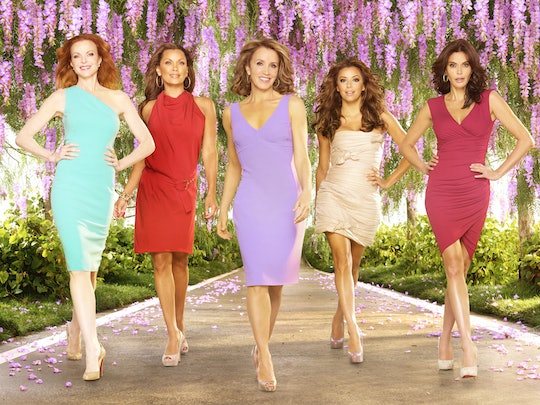 The 'Desperate Housewives' Cast Is Reuniting, But Two Wisteria Lane Ladies Will Be MIA

It's been a long eight years since TV fans got embroiled in the juicy drama surrounding the women of Wisteria Lane, and this weekend the Desperate Housewives cast is finally reuniting. Well, kind of... with the exception of two prominent cast members.

Several of the women who played housewives and friends on the ABC series created by Marc Cherry (who also gave us Golden Girls) from 2004 to 2012 will be reuniting this Sunday, April 12, according to Deadline. Marcia Cross who played Bree Van de Kamp, Vanessa Williams who played Renee Perry, Brenda Strong who played Mary Alice Young, Dana Delaney who played Katherine Mayfair, and of course Eva Longoria who played Gabrielle Solis will be reuniting on Sunday night at 8 p.m. EST for a coronavirus fundraiser livestream.

The women will be catching up from their own living rooms, of course, when they appear on Stars In The House, a web series hosted by Seth Rudetsky and James Wesley from Sirus XM that supports the Actors Fund. While the women who are participating are sure to be a wealth of knowledge for all of your behind-the-scene Desperate Housewives questions, two of the most well-known cast members will not be involved in the virtual reunion. Teri Hatcher and Felicity Huffman both reportedly declined to sign on, according to Vulture.

Hatcher, who played single mom Susan Mayer on the hit show, has struggled over the years with rampant rumors in the media that she was something of a diva on set and did not get along with the other cast members, as Metro reported. Since being on the show, she has gone on to host her own lifestyle YouTube channel Hatching Change, as well as acting in some guest appearances on shows like Supergirl. There was no reason given why she chose not to participate.

As for Huffman, who played Lynette Scavo on the show, it's perhaps not terribly surprising that she wants to keep a low profile. Huffman was sentenced to 14 days in jail, as per The Guardian, in October after she plead guilty to paying to have her daughter's SAT scores improved to get her into college. She was also given 12 months of supervised release and 250 hours of community service, according to NPR, so chances are she's pretty busy these days.

Whether or not the whole cast is able to sign on for a reunion, it will be interesting to check in and see how some of the women from Wisteria Lane are dealing with life as we know it these days. And OK, maybe to hear a juicy tidbit or two.

Anyone who is looking to catch up with the Desperate Housewives cast can click on this link on Sunday, maybe pour themselves a cocktail and just see what happens.