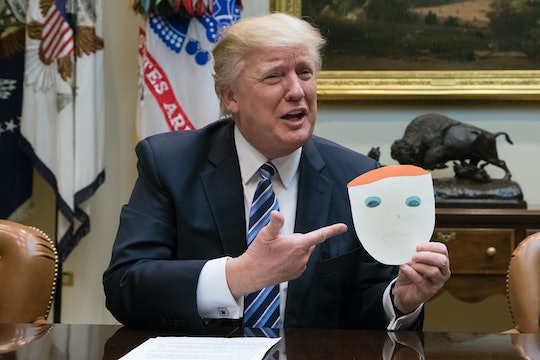 Here's What Donald Trump Was Like As A Child

You can't turn on the TV, open a newspaper, or even join many conversations in the United States — and you certainly can't log onto Twitter — without being confronted with President Donald Trump. This week alone he has defended the character, objectives, and artifacts of white supremacists. For many, his views are so repulsive that it's hard to picture Trump as anyone other than the 71-year-old hurling insults at anyone who crosses him (on Twitter, of course). But even the real estate magnate was a kid once. And details about Donald Trump's childhood can help Americans more fully understand the man he grew up to be. That's not a statement to humanize or sympathize with him, but understanding Trump is vital.

The adult Trump likes to describe himself as wildly, insanely rich, and he certainly did grow up even more well-to-do than his family's neighbors in an upscale Queen suburb called Jamaica Heights. According to The Guardian, the 23-room "Gone with the Wind mansion," as neighbors called it, where he lived for most of his childhood with his parents and four siblings, boasted a swimming pool, a cook and a chauffeur, and two Cadillac convertibles in the driveway. The cars belonged to Trump's father, Fred Trump, who, of course, amassed a fortune in the real estate business that would enable the younger Trump to launch his own lucrative career.

One popular narrative about Donald Trump's early years, though, is that his stern workaholic father essentially rejected him when he was a young boy. When he was just 12 years old, the behavior issues of the boy who would become president prompted his father to send him away to the New York Military Academy in Upstate New York. There, as Trump biographer Michael D'Antonio wrote for Politico last year, the boy would be confronted with "an aggressive and isolate subculture that prized physical toughness and defined manhood in the basest terms" until he graduated and went to college.

By all accounts, Trump excelled in this environment, taking on leadership roles and playing baseball and basketball. Still, the boy he was before he enrolled at the military academy — often described by people who knew him as a bully — closely resembles the man he is today. Except for the fact that, now, Donald Trump arguably wields more power and influence than anyone else in the world as the president of the United States.

Which is what makes anecdotes about Trump's childhood so fascinating — and illuminating. According to a report from the two Washington Post reporters who wrote the book Trump Revealed, Michael Kranish and Marc Fisher, Trump as a child frequently acted up in class, earned the ire of his teachers as well as detention after detention after detention, and made a habit of pulling girls' hair, and even reportedly once beat up another boy with a group of friends. And, by Trump's own admission, nothing has really changed, as he once told a biographer, according to the Post profile:

Put in that context, it's even more apparent why critics often refer to the Donald Trump of today — who recently appeared to cavalierly and spontaneously threaten to start a nuclear with North Korea — as a child.

Even with all this fascinating information, it's impossible for an outsider to know why Trump acted this was as a kid, and why he never grew out of it as an adult. But, writing for Quartz, Marina Budhos, who, like Trump, grew up in Queens, offered a riveting hypothesis about how the place where he spent his childhood could have influenced the well-documented anti-immigrant sentiments that have defined his campaign and his presidency so far.

Queens, Budhos wrote, was a New York City borough has long been racially segregated; Trump's native Jamaica Estates was pretty much exclusively white and " sealed off from its surroundings." And in the 1970s, the loss of about half of the city's manufacturing launched many of the city's residents into economic instability.

The situation only deepened the racial divide, making Jamaica Estates residents suspicious of those beyond its borders. As Budhos writes, it's possible that Trump "knows how to channel the ordinary families next door who felt threatened by the changes afoot in their city." So, when refers to the big, scary "inner city" and the gangs and criminals there, or when he, say, announces his candidacy by calling Mexicans rapists, he could be preying on a sense of insecurity he knows well.

By no means does information excuse Trump's behavior. But it does offer valuable insight into the mind of the president.