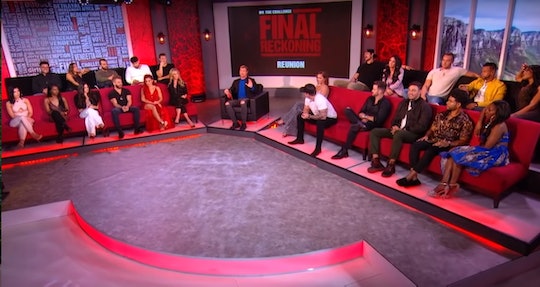 Devin & Bananas Get Into It At 'The Challenge: Final Reckoning' Reunion

After a season of extreme highs and lows, it was no surprise that part one of The Challenge: Final Reckoning reunion was about everyone's beef with each other, though mainly Devin and Bananas'. When Bananas questioned whether or not Devin should have competed this season with his father's recent passing, it started an all out war. And in this exclusive clip from Tuesday's conclusion, Devin and Bananas get into at The Challenge: Final Reckoning reunion part two.

In the clip, Amanda tells Tony that he should have put Bananas, his partner, in his place when things got especially heated with Devin. While Tony says that he sides "100 percent with Devin on this," it's actually Cory who comforts Devin backstage. And 45 minutes later, Devin is ready to confront Bananas and figure out why he came at him so hard.

During part one of the reunion special, Bananas and Devin laid into each other hard, but to be fair, Bananas' mention of Devin's father was what led to the blowup. "What I said, which is what I meant, is… Devin, you are mentally not in the f*cking place to be in this house," Bananas told him. "Your father just died and you should be at home with your family, mourning his loss — not in this environment. And he would be embarrassed at the way you’re acting right now. And yes, I hope the apple fell far from the tree because you’re a piece of sh*t."

Devin didn't take too kindly to Bananas' sentiment and he was quick to get up and confront Bananas face to face. It was whole thing. And judging by this sneak peak into Tuesday's part two of the reunion, things are about to get more intense between the feuding competitors.

The feud between Devin and Bananas was ongoing throughout The Challenge: Final Reckoning and spilled onto the stage during the two-part reunion. It's hard to say when or why it all began, but when you have a group of highly competitive people in a house during the evening and competing against each other outside of the house during the day, things are going to get messy. Such was the case with Bananas and Devin, who were on opposite teams and alliances this season. At one point earlier in the season when Devin stepped to Bananas to defend someone from his own alliance, Bananas told him, "I won’t talk to you, Devin, because without me, you don’t exist."

But their feud began long before Final Reckoning, when Devin tried to turn the entire house against Bananas in The Challenge: Vendettas. This coupe led to Devin getting Bananas sent home, which was his goal from the start, as Bananas has always been a tough competitor. But there's never been anything but bad blood between the two and it's all come to a head on the Final Reckoning reunion.

There was no getting around a confrontation between Bananas and Devin at The Challenge: Final Reckoning reunion, but I'm sure no one anticipated that it would be as dramatic as it has been. It's unclear if the two former contestants will be able to work through their issues or move past them separately, but putting them together in any scenario clearly isn't a good idea. Or, if you're more partial to the drama side of things when it comes to The Challenge, maybe it's the perfect combination? Either way, their latest fight is going to come to a conclusion in the second part of the reunion. The Challenge: Final Reckoning reunion part two airs on MTV Tuesday at 9 p.m. ET.