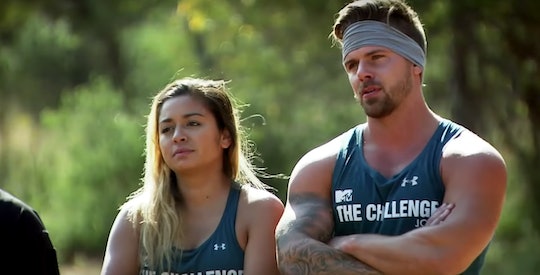 'The Challenge: The Final Reckoning' Reunion Is Going To Reignite More Drama

This season on The Challenge the teams were made based on contestants who had beef with each other prior to going on the show, which made things pretty interesting. And now that the finale has come and gone and the winning team was announced, it makes you wonder, when was The Challenge: Final Reckoning reunion filmed? Because you know there's more tea to be spilled.

The season premiered in July and spanned five months on TV, so chances are good the season itself was filmed in the spring sometime. But as far as the actual reunion goes, some fans have taken to social media to not only spill spoilers from the event, but also to announce when they attended both parts of the two-part reunion special.

One fan on Reddit posted a screenshot of an email they allegedly received from MTV casting about attending one of the two parts of the reunion taping. According to the supposed email, these dates were in October. Another fan who allegedly went to the taping of the reunion actually posted a video on YouTube on Oct. 13 detailing the event. So it's likely safe to say that The Challenge: Final Reckoning reunion was filmed in mid-October. Since this was before the season finished airing, there was plenty of drama and fighting to go around, given everything that had aired up until that point.

The Challenge is more of an endurance competition show than anything, but let's not pretend like there isn't also plenty of interpersonal drama that keeps audience glued to their seats. And based on the preview clips alone, it looks like there will be no shortage of tears, blow-ups, and throw downs. Yes please.

From the start of the season to the finale, this season of The Challenge was full of shocking twists — even if some of the animosity was to be expected. Like when Ashley Mitchell won and was given the opportunity to split her prize money with partner Hunter Barfield and chose to keep it all for herself. I can't say I blame her, and it was a perfectly wild finale to the season.

"Halfway through the season, I hated Hunter so much," she told For The Win. "Everything he said was condescending and mean. When it came to game plans, I had to fight him to listen to me." Her message as the winner of this season's The Challenge is clear. "It’s the year of the woman and women are taking over The Challenge now," she added. "These boys better keep their eyes open because we won the past two seasons and I don’t see it changing anytime soon. The boys might have a lot of muscle, but they don’t have any brains."

Obviously, Hunter is expected to be nursing some resentment about her decision when they filmed the finale in October. Regardless of whether or not their competing relationship worked for them, there were probably still some major issues left over from their time on The Challenge: Invasion of the Champions. They'd been romantically involved before leaving that season with harsh words for each other. And once they were paired up on Final Reckoning, Ashley clearly made it her mission to go far and win it all for herself. I'm sure that's just part of the drama that will inevitably fill the two-part reunion special.