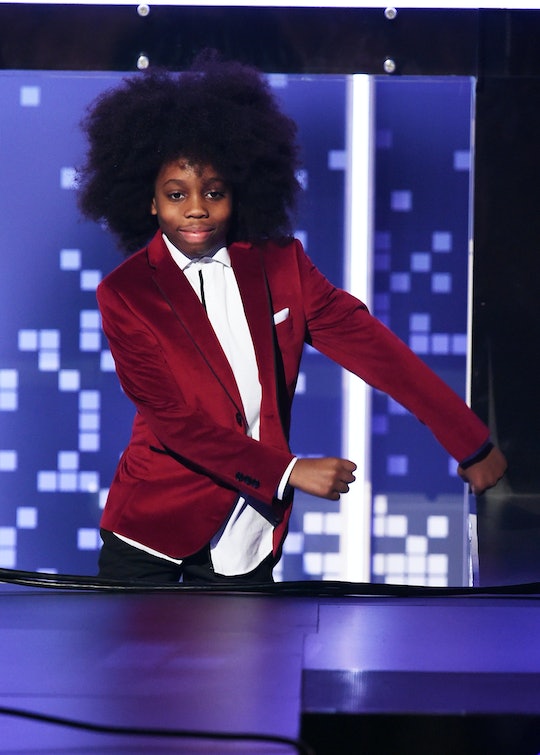 In a move that stunned no one, a tiny family member of Diana Ross absolutely stole the show Sunday night. Diana Ross' grandson, Raif-Henok Emmanuel Kendrick, was the one to introduce his "grandmommy" on stage at the Grammys, and his absolute joy while doing so was just too wonderful. From his sweet little velvet blazer, to the way he fiddled with the button as he introduced an actual living icon, his time on stage had all the makings of an unforgettable Grammys moment.

Raif-Henok isn't a newcomer to the spotlight though. While his job Sunday night was to introduce Ross and her tribute to the 60th anniversary of Motown, he was also there for the 2017 American Music Awards. At that awards show, Ross was being honored with the Lifetime Achievement Award, and her entire family was along for the ride, including her adorable grandkids. While they all seemed to steal the show, Raif-Henok's moment was especially cute. E! News reported that Raif-Henok danced his heart out as his grandmother sang, and then sweetly said, "Grandmommy, I am so proud of you," into the mic.

I mean, to call Diana Ross "grandmommy" is just perfection, you guys. I can't with this perfect family, but having Ross as a grandmother also means that it's literally not surprising in the least that her grandson is such a star.

Raif-Henok looked so adorable as he came on stage, but then he started speaking into the mic like he was... well... born to do it. (He was, you guys.) "Did she say 'little guy'?" he said into the mic after Alicia Keys introduced him. "I'm almost 4-foot-9!" And then he grinned as he waited for his audience to stop laughing — like an absolute pro.

"Thank you, Miss Alicia, for all the wonderful things you said about my grandmother. She is amazing, and young people, like me, can look up to her for her independence, confidence, and her willingness to be her unique self," he continued. "She has shown the world that nothing is beyond our reach. So, ladies and gentlemen, please welcome my grandmommy, Diana Ross."

His toothy grin and the way he fiddled with the button on his jacket was top notch, but equally cute? The way all of his family members pulled out their phones to record him from the audience. Seeing Tracee Ellis Ross smile so big at her nephew? Oh you guys. I just can't.

That whole family is just perfection, and I loved every moment of both Raif-Henok's moment on stage and his grandmother's performance. It's obvious the matriarch values her family above all else and considers them her greatest achievement, and I can only assume that Ross' love of her family is why there are so many successful members of them. I mean, can you imagine the star power running through all of those veins? And it sounds like the littlest members weren't immune to the magic. Grandmommy Diana is probably her favorite title and after tonight, I absolutely know why.