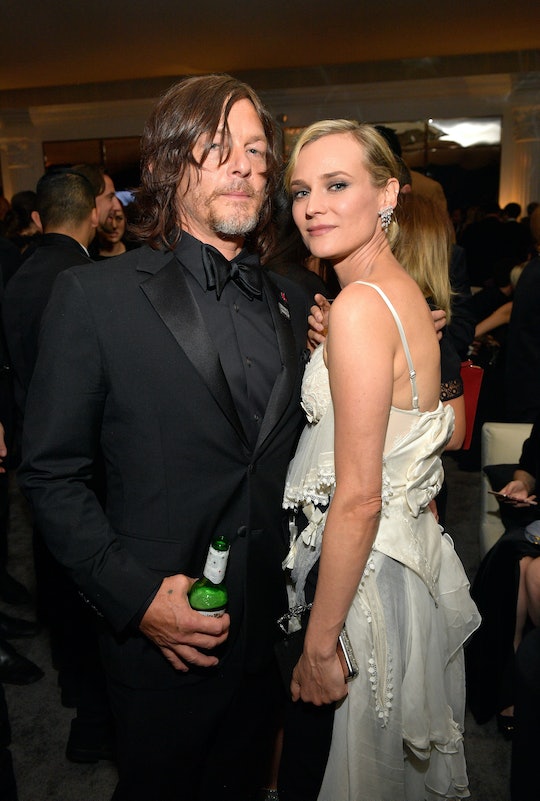 Diane Kruger has reportedly given birth to her very own "national treasure!" The actress and her partner, The Walking Dead star Norman Reedus, reportedly welcomed a baby, their first child together, according to Us Weekly. Not much is known about the couple's bundle of joy, but fans certainly could not be more thrilled to hear the news.

Romper's request for comment from Kruger and Reedus' reps was not immediately returned.

News first broke that Kruger, 42, was reportedly pregnant in late May of this year. Multiple anonymous "sources" confirmed the news to Us Weekly. And a few weeks prior, Page Six reported that sources had spotted Kruger at Cannes wearing loose-fitting clothing and drinking water in a sea of people drinking free rosé. These behaviors spurred rumors that Kruger was expecting, but she chose not to comment on the gossip.

Kruger's bump was spotted in mid-August, when she was photographed hailing a cab in New York City, as People reported.

In a 2016 interview with Net-a-Porter, Kruger hinted that starting a family was in her future. At the time, the actress was living in New York City with her then-partner, actor Joshua Jackson. She told the publication:

I feel very European and I think that I’m going to grow old in Paris. I have this fantasy of raising my kids there one day ... I just can’t imagine living my life sipping cocktails at the Chateau Marmont, you know?

Kruger expressed that exact same sentiment two years earlier, in 2014, when speaking to InStyle. She told the magazine, as reported by Just Jared:

I consider myself half French. That’s where I think I want to raise my children, where I see myself growing old. Maybe because I’m European, their way of life is very close to what I know. I’ve always loved Paris. When I went there it was my first time ever on a plane. From the moment I arrived, I was like, I’m never leaving.

And one year before that, in 2013, Kruger seemed to realize that she wanted to raise a family in Paris in an interview with C Magazine. She told the outlet, as per the Daily Mail:

It's part of the deal. I come with Paris, there's no negotiating that ... Yeah, I know it. I see myself raising kids there. I would love that, having little French babies in Bonpoint.

Kruger moved to Paris to be a model when she was 16 years old, and she has owned an apartment there for about a decade, the Daily Mail reported. Plus, she is fluent in French and German as well as English, The Cut noted. Hopefully Norman Reedus likes Paris, because it's very likely that Kruger will want to raise their baby there.

Though this is Kruger and Reedus' first child together, the 49-year-old actor already has plenty of parenting experience. Reedus and his ex-partner, supermodel Helena Christensen, share a son named Mingus, who they welcomed in October 1999, according to People. When Mingus, 18, graduated high school earlier this year, Christensen and Reedus shared photos of the former family of three at the commencement ceremony on Instagram, as People reported. It's certainly exciting that Reedus and Kruger's new baby has a big brother to look up to.

There's no doubt that Kruger is so excited to be starting her family, and hopefully more photos of her new little one will make their way onto the internet soon.