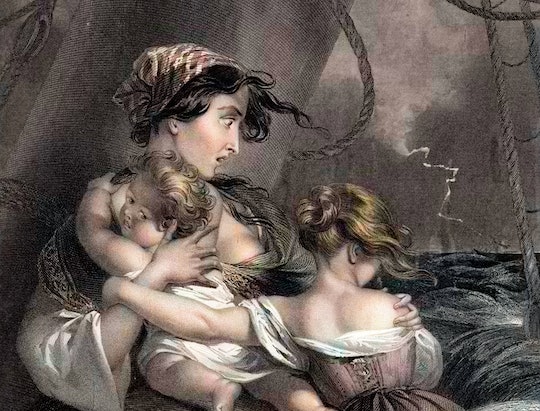 Diary Of A Parent With Sick Kids

Day 1: I have decided to keep this diary of my kid's illness for posterity, and in case I don't make it. It was a good fight, but after weeks of fastidious hand-washing, Vitamin C supplements, more hand-washing, healthy eating, running away from coughing people, and several gallons of hand sanitizer, it happened: the oldest child fell ill. I am determined to face this travail with strength, dignity, courage, and Disney+.

Day 2: This illness is like nothing I have seen before. Fever, cough, vomit, diarrhea, chills, runny nose, rosy cheeks, a pirate accent that comes and goes. Soon night will fall, and I will keep watch by the light of a cool-mist humidifier I meant to disinfect five nights ago.

Day 3: I have long told my children that true beauty comes from within, but I've spent the past several days seeing what's inside my child and it isn't pretty. It's even less pretty when those insides don't make it to the bathroom in time, which is basically always, because my son seems to think that lying down and closing his eyes is the secret to not throwing up.

Day 4: The school has sent a letter home, informing me of their strict attendance policy; I have, alas, run afoul of it. I can only assume the purpose of this letter is to make me feel like a complete and total failure as a mother. It has succeeded brilliantly.

The youngest child, seeing the attention being paid to her sick brother, has taken to fake moaning and pretending to cough.

The wine stores are troublingly low.

Day 5: Praise be! The plague has left this house and my son is healed! Unfortunately for literally everyone involved, however, it is school policy that he be fever-free for 24 hours before he is readmitted into his classroom, which appears to run contrary to the letter I received yesterday, but I digress.

He is celebrating his miraculous recovery by jumping on every piece of furniture we own.

Day 6: After a mere one day of reprieve, the girl is now sick. I suspect that she has brought this on herself by tempting the evil spirits that cause sickness with all her attention-seeking fake coughing. I fear I have descended into a hell from which I shall never return.

The wine is gone. I have moved on to gin.

Day 7: As I feared, the girl's symptoms are the same as her brother's, with the addition of her head spinning around and levitating above her bed. Also a kraken came aboard tonight and ate the last of the Girl Scout cookies.

Day 8: Tonight my husband casually commented that the house is "a bit of a mess." He walked the plank. #PositiveVibesOnly

Day 9: The child is still sick. I cannot recall the day or year. The gin is gone and I am now fermenting potatoes in a tub.

Day 10: The girl is better. Once this would have brought me joy, but after an ordeal such as the one I have endured, I no longer feel feelings. One upside of my new hardness is that I can watch Legends of the Fall without crying.

Day 15: I beg your indulgence for my several days of missed entries. After my daughter's recovery, it would seem that I, too, fell ill. I say "seem" because I don't actually remember any of it. I am, however, aware that caring for my children these past days took all my paid time off, so I was required to go into the office during my violent illness. This delirium and exhaustion have left large and apparently permanent gaps in my memory, though I am certain I accomplished absolutely nothing during that time except delay my recovery and distract my co-workers with TikToks of talking cats in Slack. I hope to catch up with any work I was unable to accomplish this past week when my boss inevitably calls out in a few days, because there's no way I didn't infect the entire office when they forced me to go in. Arr.

Day 16: The kids are sick again. I am Sisyphus, doomed for eternity to perpetuate this endless cycle of pain and suffering or at least until, like, late-April, when people stop getting sick all the time.