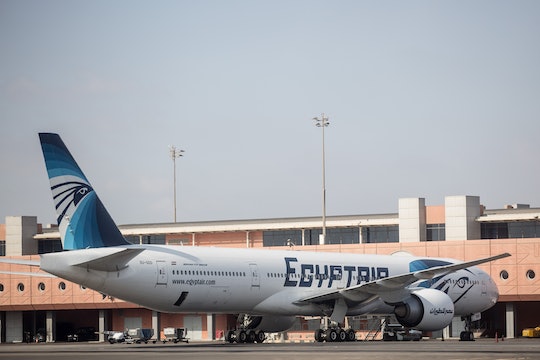 Did A Bomb Cause EgyptAir Flight 804 To Crash? This One Discovery Might Point To Yes

Investigators are continuing to look for evidence in the mystery over what brought down an EgyptAir commercial jet last week, presumably killing the 66 passengers and crew on board. But one senior Egyptian forensics official has stepped forward to offer a controversial explanation. Speaking on the condition of anonymity, the official said that human remains found at the site suggested that explosives were involved, the Associated Press reported Tuesday. Still, whether a bomb caused EgyptAir Flight 804 to crash is far from clear, as those involved in the investigation harbored split opinions on the plane’s final moments.

According to the AP report, the official was one of the people directly involved in examining the wreckage found after Flight 804 vanished from radar while traveling from Paris to Cairo Wednesday night. Specifically, the official was charged with examining the passenger remains currently held at the Cairo morgue. And his conclusion was that the damage to the bodies was so extensive, it could only have been the result of some sort of explosive agent.

“There isn't even a whole body part, like an arm or a head,” the Associated Press quoted the forensics expert as saying. ”The logical explanation is that an explosion brought it down [...] But I cannot say what caused the blast,” he reportedly said.

Other Egyptian officials have hesitated to attribute any possible cause for the plane crash, arguing that not enough of the airliner’s wreckage has been discovered to offer any firm evidence. Egypt's civil aviation minister, Sherif Fathy, said in an NBC News interview earlier this week that search teams are still “far away” from finding the jetliner’s main body:

We're far away from closing in on the fuselage of the aircraft. What we found is only small pieces and there's a lot to be done in this respect.

Still, investigating authorities have said that terrorism was a possible — even likely — cause for the crash. Early reports that the plane had made a series of sudden swerves and turns before disappearing from radar seemed to point to an acute, deliberate cause. But U.S. officials later said that government satellites showed no evidence of a heat signature along the plane’s flight path, which would be a tell-tale sign of an explosion, ABC News reported.

At this point, the fuselage and black box are critical toc determining what happened to Flight 804. Analysis of those parts would help officials answer questions about whether smoke was detected in the cabin prior to the crash or whether a fire in the plane’s computer systems caused it to malfunction. Automatic messages sent from the commercial liner seemed to confirm both of those scenarios, but French investigators warned that without examining the computing fail-safes, it would be impossible to say for sure, the Los Angeles Times reported.

Still, answers in the crash of the EgyptAir flight could take time, warned the Egyptian aviation minister, as search crews and investigators work to piece together the remnants discovered in the Mediterranean Sea.

The recovered pieces would “have to go through ... lots of analysis and tests in order to draw even preliminary conclusions," Sherif Fathy said. "For the time being ... [we] don't have much to draw any conclusions."