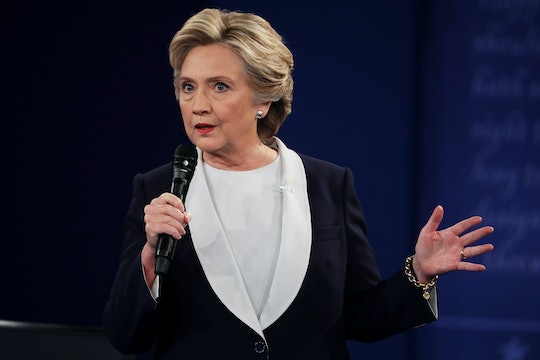 Did A Fly Land On Hillary Clinton? The Presidential Debate Is Just Full Of Surprises

At just a quarter past the hour on Sunday night, something truly bizarre happened at the second presidential debate — and I'm not just talking about GOP candidate Donald Trump's insane response to his lewd recording leaked on Friday. Every person watching the debate did a double take as Democratic candidate Hillary Clinton responded to Trump's disgusting, misogynistic comments about women. Again, not because of how amazing Clinton's response was, but America just collectively asked, "Did a fly just land on Hillary Clinton's face?"

Well, surprisingly enough, yes. #ThatHappened. At first, I thought there was a smudge on my laptop screen: I actually wiped my screen with my finger. But as Twitter quickly confirmed, I wasn't seeing things. Yes, a fly totally just landed on her face. A Twitter user named Susan was the first to point out the moment on Twitter: "I'm screaming the fly did not land on hillary" — oh it did, Susan, it did. But like Clinton's unflinching stoicism during the first presidential debate, she literally didn't even bat an eyelash or flinch or even give a shimmy shake. She just kept going like nothing happened and never skipped a presidential debate beat. See for yourself:

Clinton has been a First Lady, a Senator, a Secretary of State Now. She was in the room when Osama bin Laden was killed by U.S. Special Forces. She survived an 11-hour congressional hearing on Benghazi like it was a walk in the park. A fly lands on her face during a presidential debate? Pfft. Clinton was totally NBD about the whole thing to the point that millions of people watching it live questioned if they even saw it land on her at all.

Then there was a whole contingent of Westworld fans who went nuts about the fly incident, too — I have no idea what any of these "fly landing on face" Westworld tweets mean because I haven't yet started watching the show. That said, warning: possible spoilers below:

There will be lots of talk about who won the debate — Clinton clearly won the debate, again — but it was totally Mr. or Mrs. Diptera really stole the show as he or she landed on Clinton and then buzzed Trump later in the debate.

Here's another look at "Fly-gate" from the debate, because I still can't get over just how bizarre the whole moment was:

No doubt the Fly-gate memes out of the Trump campaign will be a-buzzin' this week.