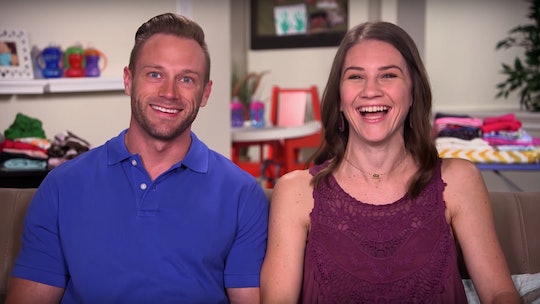 Ever Wonder If Adam Busby Went To College? Here Are The Deets

With TLC's OutDaughtered back on for Season 4, the quints have started preschool. But where did the Busbys get their own education? After all, diehard fans know Adam met Danielle when they worked at Target, as they've mentioned on air... and it can't be cheap raising six kids. Well, if you're wondering if Adam Busby went to college, you might be surprised to learn that it seems that went straight to work after high school.

Multitasker Adam — currently a Key Account Manager in Houston for a company specializing in safety equipment, according to his LinkedIn page — juggles a bunch of other titles too: He and Danielle, his fellow workout enthusiast, have opened a fitness studio, Rush Cycle (with partners), to make extra money based on their passion for a healthy lifestyle. Before that, though, according to In Touch Weekly, Adam studied at Sam Houston High School in San Antonio, Texas, though his LinkedIn page doesn't say what year he graduated.

Adam isn't the only working Busby; as noted on the family's TLC bio, Danielle also does some side jobs, such as beauty consulting, in addition to caring for her six daughters. Needless to say, the family's drive and success is definitely impressive. And clearly, career cleverness runs in the rest of the family: Grandma Mimi also has an entrepreneurial streak, too, and has gone into real estate, as Danielle captured on her Instagram feed.

And all their jobs are certainly helpful, considering the cost of everything from diapers to dinner to a degree for six humans: There's big sis Blayke, now 7, and the quints, Hazel, Ava, Olivia, Riley, and Parker, the first all-female quintuplets in the United States, as People reported. As recent video of the growing family shows, it's an incredibly adorable financial load, but a true financial strain at that. One episode a season or two back detailed their painfully comedic meeting with a financial planner and the answer to how much money alone it will cost to get all the kiddos through college was almost $2 million! Yikes...

And while exact figures aren't clear, the family is presumably paid handsomely for having a TV crew in their house and letting the world share these precious years. In 2009, reality producer Terence Michael told E! News that families on reality-shows are typically paid about 10 percent of the show's budget, and he estimates TLC shows are budgeted around $250,000 to $400,000 per episode, meaning a family could get $25,000 to $40,000 for one week's worth of filming. The series has aired multiple episodes per season, for four seasons, so doing the math... that's a lot of cash, if the estimates are correct.

Six kids can't be easy, so it's nice that Danielle and Adam are still able find time for a weekly date night and able to pay for sometimes one or two sitters, which is what's needed, as Danielle explained to USA Today. Not that anyone begrudges them a break. "You do bottles, milk, breakfast, get them dressed, play, they nap and that’s when I shower or do some laundry, constantly the dishwasher, constantly cooking or making food, constantly cleaning up, and they usually go to bed about 7 p.m., and then you start the dishwasher for the night and start over again in the morning," is how Danielle explained her hectic mom life to StyleBluePrint last year.

I think the reason people relate to the OutDaughtered crew is that the family's love and concern for their kids — and trying to raise them normally in what is not a standard situation — shines through. It's important to her as a mom that "each child individually feels just as much love as the other,” as Danielle told People.

So as a fan of the show, it's great to know that the Busbys are coming up with creative financial solutions and finding a way to make it all work.