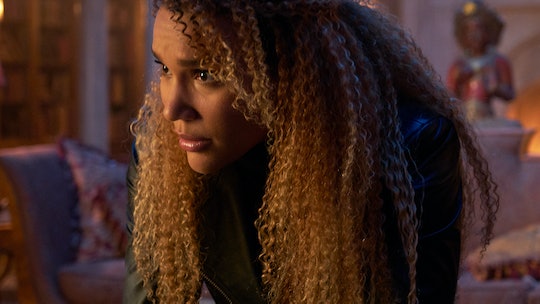 Allison & Luther On 'The Umbrella Academy' Make Me Want To Explode

Netflix's latest superhero series, The Umbrella Academy, is a lot of things — but boring is not one of them. Based on the Dark Horse comic books created by My Chemical Romance lead singer Gerard Way and illustrated by Gabriel Bá, The Umbrella Academy instantly draws viewers in with its bananas plot line and the off-the-charts chemistry between the cast, including romantic sparks between Tom Hopper's Luther and Emmy Raver-Lampman's Allison that are apparent early in the season. But did Allison and Luther hook up on The Umbrella Academy? Like the show, there's a lot going on between these two characters — and it's more complicated than you think.

For those of you who aren't familiar with the show or its characters, The Umbrella Academy follows the adopted children of Sir Reginald Hargreeves (Colm Feore), a billionaire entrepreneur and inventor, who raises them as the crime-fighting superheroes of the Umbrella Academy. Unfortunately, rather than a team of superheroes, Hargreeves got a dysfunctional family. Following years spent apart, Vanya (Ellen Page), Diego (David Castañeda), Allison (Emmy Raver-Lampman), Klaus (Robert Sheehan), and Number Five (Aidan Gallagher) come back together to solve the mystery of their adoptive father's death and to save the world from the apocalypse.

Warning: Spoilers ahead for Season 1 of The Umbrella Academy.

While the first few episodes of The Umbrella Academy dive into the characters as individuals and the overarching plot of the series, viewers may have thought that Luther and Allison were just closer to each other than the rest of their adoptive siblings. In Episode 3, Diego points out it's surprise that Allison sided with Luther in a heated discussion. Later in the episode, the show presents a tension-filled scene where the pair discuss Luther's time alone on the moon. "I wish I had been there with you," Allison says, to which Luther replied, "You were."

But Luther and Allison's romantic connection isn't confirmed until Episode 4 when Allison and Vanya go out for drinks after Allison catches Leonard (John Magaro) in Vanya's house alone. When Vanya expresses that Leonard saw something in her that no one else did, Allison says, "I know the feeling. I have't felt like that since I was a kid." Immediately, Vanya asks if it's Luther and Allison confirms. From that moment forward, the viewer knows that something is happening between Luther and Allison — but it's more than just a few stolen glances.

Now, for the complicated part. In Episode 6, aptly titled "The Day That Wasn't," viewers get to see teenage Allison and Luther get together for a secret feast under a homemade blanket fort and twinkle lights. In the scene, Luther gives Allison a heart-shaped necklace with "A + L" engraved on the front. Allison then asks Luther to dance with her, but they are abruptly interrupted by Hargreeves, who claims that fun and games are restricted to Saturdays between noon and half past noon.

Later in the episode, present day Luther and Allison have given up on trying to save the world from the apocalypse. Allison is going to spend her last moments with her daughter and says goodbye. But before she gets away, Luther asks her to dance with him. The couple dances to Toploader's "Dancing in the Moonlight" and the two finally kiss. The couple enjoys their moment and Allison tells Luther that if they leave now, they both can catch the flight.

Meanwhile, Number Five has a plan of his own at the Commission headquarters. In an attempt to stop the apocalypse from happening, Number Five goes back in time again, promptly erasing Luther and Allison's revelation.

So if you're still wondering if Allison and Luther ever got together, the answer is still "it's complicated." While the couple found each other at the end of Episode 6, the time jump seems to have erased that possibility — at least for now. But one thing is for sure. The Umbrella Academy is filled with time travel and everything we know now is uncertain.

The Umbrella Academy is streaming now on Netflix.