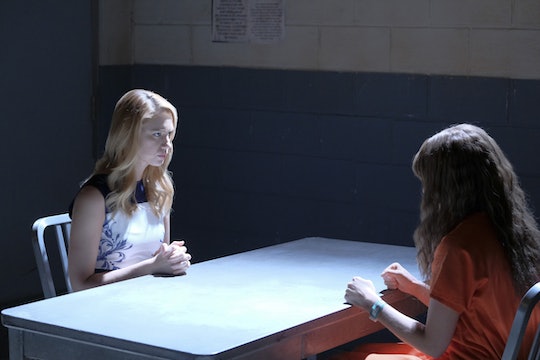 Anezka Can't Be Trusted On 'Jane The Virgin'

Jane the Virgin finally returns on Monday night and there's still a lot of questions the show needs to answer, starting with who killed Scott? The polyester vest-wearing manager was found dead when the showed jumped three years ahead in time and though the police first ruled it as an accident, it's clear to fans (and is becoming clear to the police) that it was a murder. There are a lot of potential suspects out there, but the number one culprit seems to be Petra's sister and Scott's ex-wife, Anezka. So did Anezka kill Scott on Jane the Virgin? All signs seem to point to yes.

In the last episode, the police questioned Petra about her twin sister, who has yet to be seen since the time jump. They suspect her because in Scott's burn book it says they got into a big fight right before Scott went missing. Although Petra claimed she hadn't spoke to Anezka in three years, she then sent Anezka an email that said, "I won't be able to contact you for a while. You need to go dark. I'll make a deposit into your account." Suspicious.

Obviously, Petra's covering for her sister, but does that really mean Anezka killed her husband? In all honesty, probably not. Jane the Virgin loves their twists and there's no way the show would make Scott's killer this obvious, this early. No doubt there's a plot twist coming.

So if Anezka didn't kill Scott, who did? Petra is still a possibility. She did know to move the body, which already makes her look incredibly guilty. However, if Anezka did kill Scott, that would explain how Petra knew the body was there.

Rafael is also still a possibility. The show briefly pointed the finger at him when it showed him meeting up with his friend from prison and then the friend tried to get Scott's burn book out of Petra's room. The show has since moved on from that, making Anezka now look like the guilty party, but is that just to distract fans from the obvious killer? It's hard to say.

Another possibility is that Rose did it. She's supposedly a changed woman for Luisa, having altered her face one last time so they could start over. But fans have yet to see Rose or Luisa since the time jump, which begs the question what exactly are they up to? Rose has the tendency to pop up when you least expect her and has been used as the plot twist on the show multiple times. Therefore it wouldn't be all that shocking if she was somehow involved in Scott's murder.

Fans can start getting answers when Jane the Virgin returns on Monday night at 9 p.m. ET on The CW.