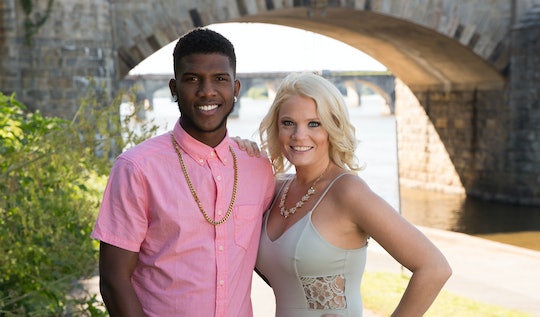 On 90 Day Fiancé, Ashley and Jay decided to forgo their wedding plans and elope in Las Vegas. The decision was made just four days before Jay's 90-day K1 visa was to set expire, so they didn't have much time to get to Sin City. The episode left viewers hanging, and dying to know: Did Ashley and Jay really elope on 90 Day Fiancé?

Based on a few social media clues, it would seem that Ashley from Pennsylvania, and Jay from Jamaica, are, in fact, married. On Oct. 12, Jay posted an Instagram photo of himself and Ashley, captioned, "Me and wifey livin our best life." The post has since been taken down. Additionally, he has posted photos implying that the couple is still together as recently as this week. "I promise I will always be there for you through all the ups and downs, no matter what happens. Love you babe girl get well soon," he captioned a shot of Ashley, who has lupus, resting in a hospital bed. And a few days ago, Ashley posted a shot of herself and Jay, presumably in Jamaica, captioned, "Missing sweet Jamaica." If the couple is still living together in the United States, that would mean they are most likely married, since Jay could not legally stay in the country after 90 days without marrying Ashley.

That said, I can't be 100 percent certain whether their wedding was an elopement — but based on the episode titled "No Way Out," it would seem that it had to be. Towards the end of the episode, Ashley and Jay sat in her living room packing for Las Vegas, four days before the 90 days were up. "Jay and I have decided to elope for multiple reasons. We've had to tackle a fair amount of issues, more than I thought we would, in 90 days," Ashley told the cameras during the episode. "The past 90 days have been very stressful, and it's ending with a marriage, which is what I wanted. However it's not the wedding that I pictured."

And the couple certainly has faced stress. On top of Ashley's best friend Natalie constantly trying to break them up (because she suspected that Jay cheated on Ashley), Ashley and Jay received an onslaught of racist comments on the internet in the weeks leading up to their big day. Some comments even implied a threat of coming to shoot up their wedding, which caused several family members to drop out of the wedding. It's also ultimately what made Ashley and Jay decide to cancel the affair and elope in Vegas.

Hopefully upcoming episodes of 90 Day Fiancé will answer fans' questions about exactly how Jay and Ashley's engagement ends. Additionally, hopefully the couple is no longer receiving any hate messages or threats, because no one deserves that.