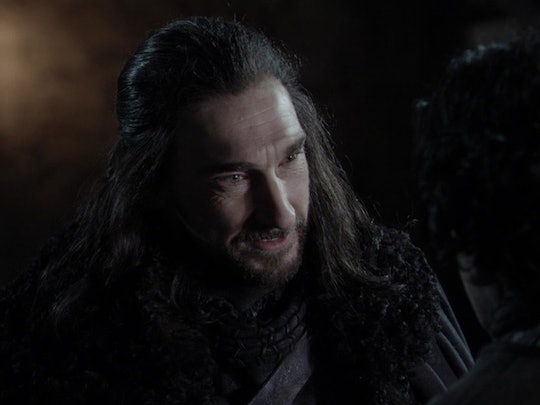 Did Benjen Save Bran & Meera On ‘Game Of Thrones’? He's The Only One Who Could Have

When Meera set out, pulling a warging Bran behind her in the literal dead of winter in Sunday's episode of Game of Thrones, we were all waiting for them to be killed by the gang of white walkers on their tail. Then someone on a horse swooped in with a ball of fire and basically rescued the poor kids. So, did Benjen save Bran and Meera on Game of Thrones? Remember Benjen Stark? He was Ned's little bro, and we last saw him going north of the Wall way back in season 1. And since we never did hear from him again, who else could possibly be helping Bran and Meera now, right?

If it's not enough that Bran has been seeing the young version of his Uncle Benjen in his flashback vision quests with the Three Eyed Raven, then consider the fact that Game of Thrones isn't known for just forgetting about things. Except for maybe the Sand Snakes right now, but that is neither here nor there and we can forgive them that right now. There are far more important things going on in the Seven Kingdoms.

If it isn't Benjen who is helping Meera and Bran north of the Wall, then there aren't very many contenders as to who it could be. You could argue that some stray wildling is helping them escape the army of white walkers, but aren't most of the wildlings either dead or at Castle Black by now anyway? Okay, that probably wasn't all of them, but would they really have this masked hero ride up on a stallion to save Bran and Meera and have it not be Benjen Stark?

Apparently, being able to be face to face with an actual adult Stark was what Bran needed to be able to realize his real importance in Westeros. Seeing Benjen as, very likely, the closest thing we'll get to the character of Coldhands from the books, gives you hope that even if some of our favorites of Game of Thrones do get turned into wights, maybe they too could be reanimated by the Children of the Forest and, in turn, be a real match for the white walker army to come. Because you know that's where this is all headed.

If Hodor had to die in order for Bran and Meera to eventually be met by the new and kind of Uncle Benjen but also kind of not, then it is what it is. Okay, maybe Hodor's death isn't to be taken lightly, like ever. But Benjen was legit the only person (if that's what he is at this point) who could have helped Bran and Meera.