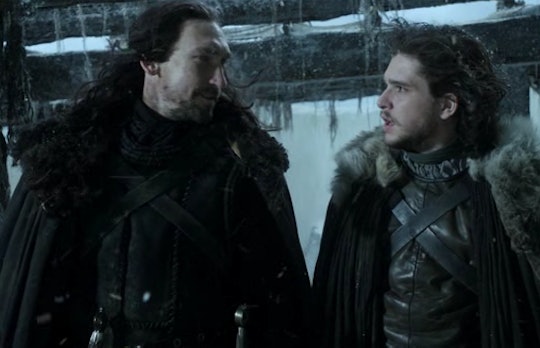 Will Benjen Return To 'Game Of Thrones'? Bran & Meera Are In Danger Beyond The Wall

The last time we saw Benjen Stark on Game of Thrones, he was seen heading north of the Wall with a group of rangers of the Night's Watch in Season 1, and was never seen or heard from again. Later, his horse makes its way back to Castle Black, but alone, and except for a few mentions of Uncle Benjen, that is the last we hear of him... until now. So, will Benjen return to Game of Thrones? In Season 5, when the men who were supposed to be Jon's rangers lured him outside to murder him, it was Olly (freaking Olly) who lied to him by saying that his Uncle Benjen had been spotted just north of the Wall. This of course got Jon outside, where Allister Thorne further supported the lie, saying that he's been spotted back at Hardhome, where they'd encountered the army of white walkers.

Of course we know this to be a total lie, since it was just the means to get Jon Snow outside so they could take turns driving knives into the poor bastard. Literally — what a shame. But the fact that Benjen was mentioned at all makes it seem as if the writers of a Game of Thrones wanted a way to remind us, the viewers, of the very existence of another living member of the Stark family. Also, we keep seeing the younger version of Benjen in Bran's visions. Which, OK, is understandable since we're also seeing Ned and Lyanna, but if seeing them is important, then so is seeing Benjen and hearing his name. Again, to remind the viewers of who he is so that when he comes riding up to save Bran and Meera beyond the Wall, we aren't all like, "Say whaaaat? Who dat?"

Let's think about it, though. Hodor is, presumably, dead (I know, I know, I'm sorry), and Meera is running away from the caves full of white walkers with Bran in a wheelbarrow, basically. Where is she going to go and how far is she even going to get? If the white walkers and the Night King make it hard for the Night's Watch to beat, how are these young teens (one of whom is still out cold) going to fight them off?

Enter Benjen, of course, to save the day and make his re-entry into Game of Thrones right when both Bran and Jon need him. So, let's take a look at the evidence that might lead you to believe that Benjen is coming back to Game of Thrones.

The Repeated Mention Of Benjen

Like I said, Benjen's name has come up a lot recently, and Game of Thrones isn't about doing things just because they sound or look good (except for gratuitous breast shots — sigh). The fact that his horse even returned to Castle Black at all was just another small reminder that somewhere out there, he does exist. They just didn't have a place in the show for him again until now.

His Season 1 Words To Jon

One of Benjen's comments to Jon in Season 1 of Game of Thrones — before he leaves with the rangers — is in response to Jon insisting that he doesn't care about having a family, and thus would do fine in the Night's Watch. Benjen says:

This could be just a wise older figure showing his regrets at having never been able to have a family himself, or it could be Ned Stark's brother hinting at Jon's true parentage. If Ned Stark would have told anyone at all about the Tower of Joy, it would be his trusted brother, right?

The Dark Figure In The Promos

If you slow down the promo for Episode 6 of Season 6 of Game of Thrones, you can see a dark figure on a horse fighting off what appear to be white walkers, or otherwise harmful characters. The setting is very similar to where Meera and Bran are now, and Benjen would be the perfect savior to pop out and have their back when the kids really need it.

In the books, Coldhands is said to be a mysterious brother of the Night's Watch who Leaf informs Bran of dying long ago. And since George R.R. Martin insists that Coldhands doesn't have a place in Game of Thrones, it is said that he and Benjen may end up being one and the same. What does this even mean for the reappearance of Benjen at all? Not too much, but it gives the writers a way to use the Coldhands character and bring back the presumed dead Stark.

All Of The Other Living Starks Are Accounted For

Season 6 of Game of Thrones has been big for Stark reunions. OK, maybe we've only seen the reunion of Jon and Sansa so far, but as viewers, we've been reunited with Rickon, and Bran has seen his family in many flashback visions. Then, in Sunday's episode, we saw Arya watch a play about what Sansa was up to in King's Landing before she dipped out. So, with all of them present and accounted for — and hopefully making their way to each other eventually — shouldn't the last remaining member of the Stark family be present somehow too?