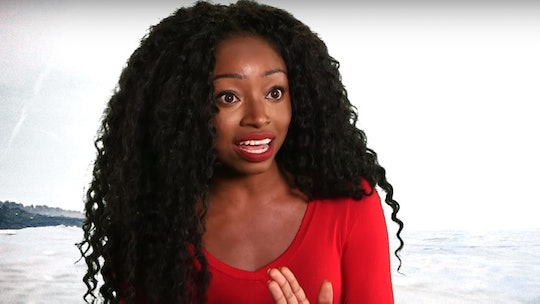 Codi & Candace Have Some Unfinished Business On 'Floribama Shore'

Floribama Shore might be the southern version of the original Jersey Shore on MTV, but lately, it's seeming more like a matchmaking show with unknowing participants. I’m all for hookups among cast members, but after Jeremiah and Kortni almost had a thing, Gus and Nilsa are still on and off, and now Candace and Codi could get together, it’s looking more like a dating reality show every day. That being said, did Codi and Candace ever hook up on Floribama Shore for real?

We all know that Codi’s crush on Candace gradually turned into something more serious, so it wouldn't be all that surprising to learn that they got together once filming ended. Right now, however, it looks like they never hooked up or even made out during filming. There were a few times when it seemed like Candace might be interested in Codi as more than just friends, but every time they got close, something else got in the way.

Maybe Candace and Codi are one of those couples who will stretch their story out over the course of a few seasons before they find their way to each other, but right now, it looks like they’re keeping things more or less platonic.

Codi recently posted a couple of Instagram photos with Candace in New York City. Several fans commented, asking questions about their relationship status, but their trip likely had something to do with promoting the show together. They also live in different states, which would make a relationship — or a hookup — pretty tricky.

I do believe that Codi has real feelings for Candace, but on her part they never really seemed reciprocated, which is totally fine. Things haven't been completely platonic between them, though. They have shared a couple of kisses, which could mean something more happens between them next season. Back in August, after Codi’s first chance at dating Candace was kind of shot down, he told TooFab that there was still a chance they might get together.

"I can let you know that there might be a situation where we get to actually really go on a date," he said at the time. "So round one didn't really work out as planned, maybe round two you reckon to see Codi and Candace go on a date. I don't know."

Since then, Candace and Codi did get a little closer. And in a clip for Thursday’s episode, which shows Candace’s last day at the Floribama Shore house, it looks like Codi has some final words to hopefully spark something with her before she leaves. The clip first shows Codi kiss Candace goodbye on the lips and then he chases after her taxi.

"I’m like, man, she’s really leaving. This is it," Codi tells the camera, as if they aren't going to be together again in a few months to film another season. "Can’t have no regrets." When he gets to her taxi, he tells her he wants "one more kiss." Neither have openly admitted to hooking up on the show or after filming, so at this point, any speculation about Candace and Codi hooking up would be just that.

Codi also recently posted a photo on Instagram with Siesta Key star Canvas, which prompted some fans in the comments to jump to the conclusion that he’s moved on from Candace to the other MTV star. Chances are, it was nothing more than two reality TV stars from the same network hanging out at another reality star’s party, but if Candace and Codi haven’t hooked up yet, they might just be better off as friends.