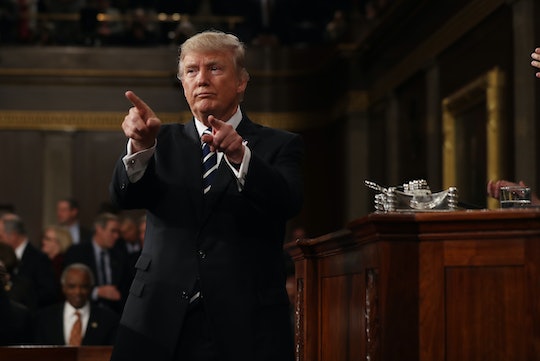 Did Trump Leak His Own Tax Returns?

In the minutes after news broke that President Donald Trump's 2005 1040 tax return had been leaked to the media, many immediately wondered who was behind the leak, why the leak came tonight, and what was hidden (if anything) inside the forms. But the most pressing question from the Tuesday, March 14 leak was the one that asked: Did Donald Trump leak his own 2005 tax returns? In photos of the "leaked" 1040 form, which was leaked to David Cay Johnston of DCReport.org from an anonymous source, a stamp clearly stating "client copy" raised many eyebrows about the purpose of the supposed "leak."

Was this a way for the Trump administration to say, once and for all, that Trump did pay taxes that one time in 2005? Was it a distraction from other issues? Or was the information really leaked to the media from someone inside the Trump camp? Romper reached out to the president for comment on the allegations that he may be behind his own salacious "leak," but did not hear back at the time of publication.

A statement from the White House following the leak shamed the "dishonest" media and its "desperation" to turn any non-story into a story for ratings. The statement included information on what Trump did pay:

That being said, Mr. Trump paid $38 million dollars even after taking into account large scale depreciation for construction, on an income of more than $150 million dollars, as well as paying tens of millions of dollars in other taxes such as sales and excise taxes and employment taxes and this illegally published return proves just that.

But to be honest, Twitter isn't wholly buying it.

As details continue to roll out, it's important to note that Rachel Maddow used the slim window at the beginning of her show to relish in the importance of such information being available to the public. While many felt she "missed" her chance to break the story (in the time it took her to hold up the paperwork confirming that she did, in fact, have the story, CNN and TheDailyBeast.com had also leaked the information online), Maddow used the opener of her show to educate and inform her readership — and it's a segment worth watching, digesting, and watching again:

What Maddow did with the window of time presented to her is something that will likely not be forgotten any time soon because it sheds a particularly bright light on just how stunning the availability of this information is to the American public. After reading the scathing response from the White House on the leak, Maddow said:

For the record, the First Amendment gives us the right to publish this return. It is not illegally published. Nor are we fake. Pinch me! I'm real.

The point is, plain and simple, the mic drop on the whole story. In addition to doing exactly what journalism asks of its journalists — verifying the integrity of a story and reaching out for comment — Maddow makes the point that the Trump administration has been working very hard to counter: The truth is, was, and always will be the chase. The work of journalists has not changed since Trump assumed the White House nearly two months ago. That work has become tireless, frustrating, and nonstop, yes, but the mission of journalists has not changed. The goal is, was, and always will be the truth, and just because Trump has used many an event to label journalists and journalism he does not support as "fake," Maddow's commitment to the story — and the information it serves to the people it immediately involves — serves as a beacon of hope for those committed to telling stories with accuracy and honesty.

And the "client copy" language has everyone wondering if this is truly just a smoke screen for something else. A distraction from Trumpcare? An opportunity to move the press off Trump and Russia?

As it stands, there's no clear confirmation on why or where the leak came from. The only promise is that where there's smoke, there's fire — and chances are, this is just the very, very beginning.