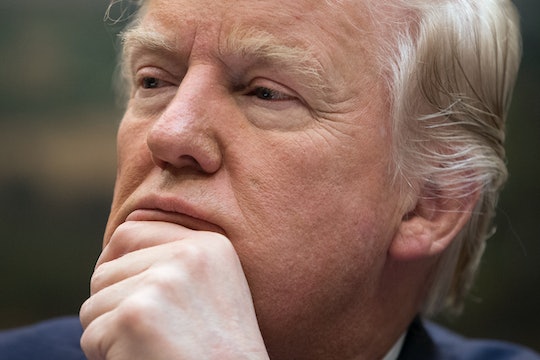 On Tuesday, MSNBC anchor Rachel Maddow tweeted that her show had, at long last, obtained President Donald Trump's tax returns. On her show Tuesday night, Maddow added that her team had in its possession a 1040 form from 2005, so they aren't totally complete — but they are some form of recent return. So who leaked Trump's tax returns?

To no one's surprise, the White House immediately began calling the act illegal in a statement to the press, although the First Amendment does allow for news organizations to publish leaked public records. Regardless, a spokesperson insisted, "You know you are desperate for ratings when you are willing to violate the law to push a story about two pages of tax returns from over a decade ago." But they did seem to corroborate Maddow's claim that the 1040 form in the her possession was legitimate by adding Trump had paid $38 million dollars on an income of around $150 million that year.

We don't know who leaked the tax return, per se, but investigative reporter David Cay Johnston, who first broke the news, found them in his mailbox, as he explained on Maddow's show Tuesday night. He didn't solicit them, so it's not a violation of the law as Trump's team suggested. In fact, Johnston went as far to suggest on Maddow's show that Trump's team could have leaked the documents themselves. "I have to include that as a possibility," Johnston said. The "client copy" stamp on the return would suggest that it came from someone close to him and not the Internal Revenue Service.

The White House statement sort of beat Maddow to the scoop by releasing some of the specific numbers, but the fact that they responded at all is interesting on its own right. The year 2005 is when Trump married Melania, was a year into hosting The Apprentice, and founded the now-defunct Trump University. If anything, the 2005 1040 form will give some more insight into Trump's dealings and income than the previously released 1995 1040 forms.

But it's not totally about the numbers, since every American is allowed to use the tax code, as the White House said in its statement, "to pay no more tax than legally required." Taking advantage of the tax code is one thing. The real draw of the tax returns is getting to see where Trump really makes his money and what international business ties he has. Given the recent scandals surrounding some of his ties to Russia — yeah, the tax returns are relevant.

Also, the president has promised tax reform "that will benefit all Americans." But if Trump has used some unconventional methods to declare all of his income, it's worth asking how much he really knows about tax reform that benefits "all Americans" and what he values when it comes to paying them. (He once said during a debate that it was "smart" to not pay taxes, although they are the very basis of a functioning democracy.)

Americans deserve to know where Trump's money is tied up, his sources of income, and what tax loopholes the president has favored in the past. The more he hides his tax returns, the more interesting the tax returns become. If everything is above board, why not just disclose the returns like every other president has done in modern history?

Despite what the White House might argue, the tax returns matter.