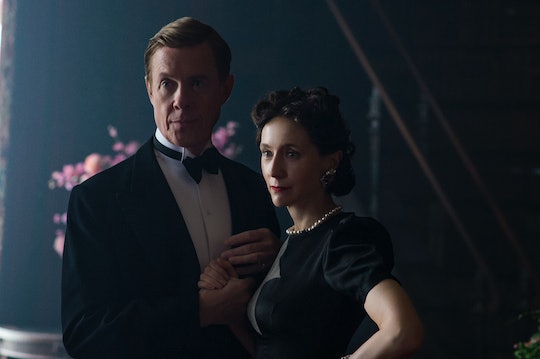 Did Edward VIII Really Abdicate The Throne? 'The Crown' Is Historically Accurate

In telling the story of Queen Elizabeth II, Netflix's new series The Crown must also tell the story of those who came before her. Because if history had unfolded in the way it was technically supposed to, then she would never have been Queen. As viewers come to learn throughout the series, the actions of Elizabeth's uncle, Edward VIII, set off a domino effect that changed his family's lives and, because his family was royalty, also impacted the course of history itself. Edward's abdication of the throne pushed his brother (Elizabeth's father, King George VI) into the spotlight and eventually led Elizabeth herself to become Queen of England. So did Edward VIII really abdicate the throne like it plays out on The Crown via flashbacks and references? To put it bluntly, yes.

Edward VIII was king for little under a year, ascending to the throne in January of 1936 and then abdicating in December of the same year so that he could marry the woman he loved, Wallis Simpson. Simpson was not considered an appropriate match for a monarch because she was an American two-time divorcée who was still in the process of getting that second divorce when she got involved with Edward. But even despite everyone against this union, Edward held firm and gave up his position so that he could marry Simpson, proclaiming in a radio announcement, "I have found it impossible to carry on the heavy burden of responsibility and to discharge the duties of king, as I would wish to do, without the help and support of the woman I love."

Part of the reason the couple could not be married in the first place was because being king meant Edward was also the head of the Church of England, which (at the time) didn't allow a divorced person to remarry if their ex was still living. But because Edward remained set on marrying Simpson, he originally tried to work around objections in order to satisfy everyone. In fact, a "morganatic marriage" was suggested, which would mean they could marry, but Simpson would not become queen and instead be given some other title. When this didn't work, that's when Edward chose to abdicate. He was made the Duke of Windsor (which is how he's mainly referenced in the show), and he and Simpson remained married for thirty-five years until his death in 1972.

But don't get too swept up in the romance of it all. Edward VIII and Simpson are controversial figures not only because of the scandal that led to him abandoning the throne, but because of their friendly relationship with Adolf Hitler. Yes, that's right: their friendly relationship with Adolf Hitler. Edward and Simpson visited Nazi Germany before the war in 1937, and have been accused throughout history of being Nazi sympathizers. Later on, the Nazis allegedly had a plan to to kidnap Edward and put him back on the throne, but this never came to pass.

Ultimately, to keep them out of the way, Edward and his wife were sent to the Bahamas by the British government, where he acted as governor. They lived there until the end of the war.

Their love story was depicted in the notorious flop W.E., directed by Madonna, but you're probably better off just watching The Crown instead and see what you think scandalous romance.