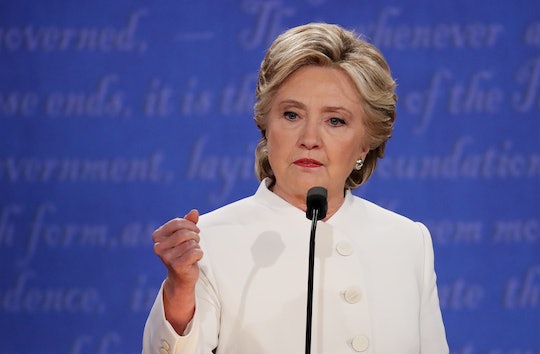 Did Hillary Clinton Really Fight For The Wall In 2006?

During the final presidential debate, Republican presidential nominee Donald Trump once again spoke of his plan to build a wall as a way of border control and accused his opponent of agreeing with the idea ten years ago. But did Hillary Clinton really fight for the wall in 2006 or is this more of Donald Trump's outlandish claims?

Trump's idea of building a wall along the United Sates /Mexican border isn't exactly original. According to CNN, President George W. Bush started a border fence in 2006 under the Secure Fence Act. Haven't heard of it? CNN reported that the project hasn't entirely been successful, as it has had both funding problems and a lack of interest from congress. But how does Clinton fit into this project?

The record of Senate votes shows that Clinton voted yes for the act, but her response wasn't totally out of line with other democrats. President Barack Obama also voted for the Secure Fence Act along with 26 other Democratic senators, according to the records.

But the Secure Fence Act is a little different than Trump's proposal to build a wall that will put an end to immigration. According to Trump's website, his plan simply states that he would, "begin working on an impenetrable physical wall on the southern border, on day one. Mexico will pay for the wall."

The Secure Fence Act, however, reads a little differently. According to the report on GovTrack, the goal of the Secure Fence Act was to decrease the borders in an effort to decrease illegal entry and drug trafficking, but to also open legal channels for immigrants to pursue citizenship without fighting huge obstacles.

Although Trump can continue to say that Clinton once wanted the same wall he plans to build, his accusations aren't 100 percent accurate. It seems that Clinton has always been for some type of immigration reform. Her website noted that Clinton's stance on immigration is to "resolve the outstanding issues around our broken immigration system." Her campaign also suggested that she plans on upholding the law and protecting our borders, but she intends to make citizenship an attainable goal for immigrants.

Trump is right — Clinton did once vote for border security. But her vote had more under the surface than simply keeping out immigrants. Her border security vote wasn't about making America "great again" nor was it about serving the best interest of those who oppose immigration. Instead, it hoped to turn America into what it has always been — a land of opportunity.