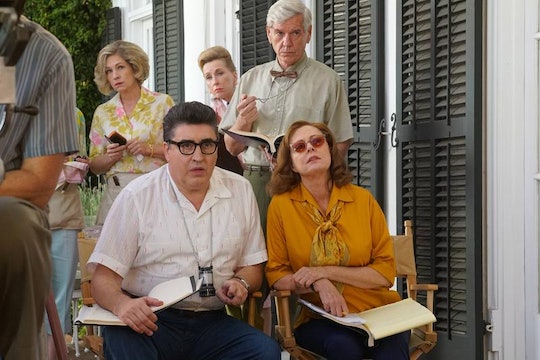 After all of the drama — and unexpected success — of What Ever Happened To Baby Jane?, the directors and studio wanted Joan Crawford and Bette Davis to do another film together. As seen on Feud, they did manage to wrangle the two women to work together once again. But did Hush...Hush, Sweet Charlotte win any Oscars or take off like Baby Jane did? It's a complicated story. The short answer is no, Hush...Hush, Sweet Charlotte did not win any Oscars, but it was nominated for: Best Art Direction, Best Score, Best Costume Design, Best Editing, Best Cinematography, and Agnes Moorehead was nominated for Best Supporting Actress.

Wait, what? Weren't Crawford and Davis supposed to be the stars of that film?It wasn't all that simple. Sweet Charlotte was originally called What Ever Happened to Cousin Charlotte, and was written by Henry Farrell, who also wrote Baby Jane. Director Robert Aldrich and 20th Century Fox were very interested on piggy backing on the success of Baby Jane and this new horror genre (featuring psychotic women, of course) they created.

Both Crawford and Davis were still desperate for roles in Hollywood and so they did sign on together, though Crawford was sure Davis and Aldrich were sleeping together, which added only further fuel to the fire of their tension-filled relationship.

But Davis was still smarting from the 1963 Oscars, where Crawford had convinced Anne Bancroft to let her accept the award in her place. Not only did Davis lose, she had to watch Crawford revel in the glory. According to Hollywood legend, Davis started to force the cast and crew of Sweet Charlotte to pick sides in their personal rivalry. When Crawford arrived in New Orleans to start doing principle photography, no one picked her up at the airport. Immediately, she fell "sick." She was sick for about two months, forcing Aldrich to hire a private investigator to snoop and see if she was faking it or not.

Eventually, the studio decided to replace Crawford and Aldrich enlisted Olivia de Havilland. Crawford later complained that no one even told her that she was being fired. Davis demanded that the title be changed from Whatever Happened to Cousin Charlotte to Hush... Hush, Sweet Charlotte so that it would be very, very clear that this wasn't a sequel , but something entirely new.

With all of that behind-the-scenes fighting, it's a wonder that they were able to make a movie at all. Although it won some awards and did semi-OK at the box office (it was released on Christmas day in 1964), it was not the major hit that Baby Jane was. Maybe it's better that way, since it could have been the end of Crawford if it was, right?