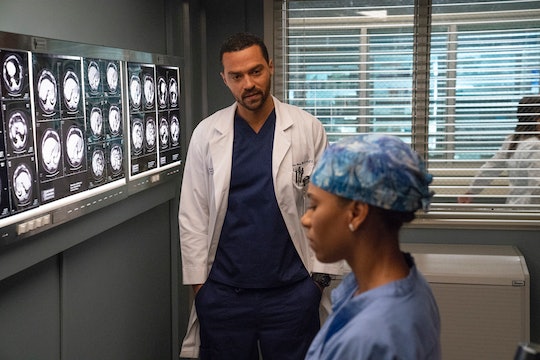 Is It Really Already The End For "Jaggie" On 'Grey's Anatomy'?

Jackson and Maggie spent the better part of Season 14 of Grey's Anatomy falling in love and figuring out where they stand with each other — considering his mom is married to her birth father. Now that they're a couple though, things seem a little tense and in the preview for Thursday episode, Maggie accuses Jackson of cheating. So did Jackson cheat on Maggie on Grey's Anatomy while he was away looking at trees? From the looks of things, their burgeoning romance could already be headed for the rocks.

In the preview for Thursday's episode, "Anybody Have a Map," Jackson admits to "talking" to other women and it does seem like the beginning of the end of them if "talking" led to something more serious. Plus, Maggie is definitely an over-thinker and I could see this spiraling into something major. Then again, I don't see Jackson as the type to actually physically cheat, crisis of faith or not. He's not perfect, but he's also always taken relationships seriously. Which is why I have a feeling it's more of an emotional affair — which to be fair is also not cool.

In a clip from Thursday's episode posted on Twitter, Maggie confronts Jackson about some mysterious texts. He doesn't hide the fact that he not only met someone when he was at a monastery, but has also stayed in contact with her. That alone isn't awful, but the fact that he seemed to hide it from Maggie probably wasn't a good idea. Side note: who finds romance at a monastery?

He went off on this exploration of God and religion to figure out his own beliefs, knowing that Maggie didn't share them and that he couldn't talk to her about it. Instead, he found someone else — a lady someone else — who he could talk to. And after leaving the monastery, he's continued to talk to her without telling Maggie. Up until this point, their relationship was on solid ground. They had a slow start, but after Jackson reciprocated Maggie's feelings, things started moving forward. They got past the whole "my mom is married to your biological dad" issue and after getting April's blessing, it was supposed to be smooth sailing. Unfortunately, this hiccup is the first big warning sign that all is not well in the land of really really ridiculously good looking doctors.

Showrunner Krista Vernoff told Deadline that there could be some obstacles for Maggie and Jackson this season, partly due to his newfound faith. "Maggie and Jackson have a new romance. We spent a season burning them committing to each other romantically, but they’re in the early stages. A relationship isn’t really a relationship until it’s gone through some challenges," she said. "I do think that there are some interesting challenges coming up for that couple, and you have to tune in to see how they navigate them."

Luckily for "Jaggie" fans, that doesn't sound like a breakup born out of Jackson cheating on Maggie. They might take a break to figure things out or they could have a long road ahead of them, much like Jo and Alex had. They might also run into some issues with their respective parents that put this whole fiasco on the back burner. It's been teased more than once that Richard could go back to drinking after being sober for eight years and if that happens, Jackson and Maggie will have a handful of other problems to deal with other than their relationship woes. It's just a big mess right now and Jackson's potential infidelity is the cherry on top.