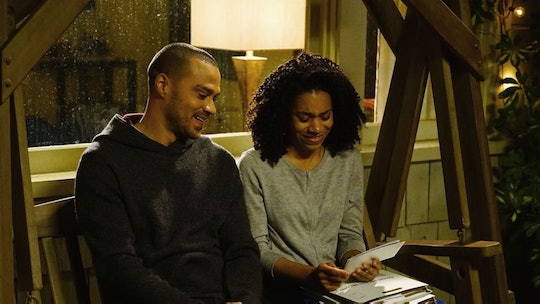 Jackson Is Back On 'Grey's Anatomy' & Twitter Has Some Thoughts

At the end of Grey's Anatomy Season 14, Jackson found faith for the first time and spent the first few episodes of Season 15 grappling with his newfound beliefs. He took off to find himself in the wilderness and it caused a rift between him and Maggie, especially since they seemed like they were off to a solid start last season. Now, Jackson returned to Grey's Anatomy and Twitter has mixed reactions. Those who are all about "Jaggie" are more than ready to see the couple pick up where they left off. But those who feel a little protective over Maggie seem to wish Jackson had stayed away. It's a whole thing.

To be fair, Jackson did have a near death experience in the Season 15 premiere, which prompted his whole come to Jesus moment. It's not actually clear what he believes in yet, but it was only natural for him to continue to question what he thought to be true as far as religion and science goes. I don't know if he absolutely had to leave town and ghost his girlfriend in the process, but now that Jackson is back, he's ready to make things work with Maggie.

Fans who have followed and supported Maggie and Jackson since the very beginning of their relationship were happy to see the couple reunited on Grey's Thursday night. When Jackson showed up at the hospital, all was right in Shondaland. And at least Jackson didn't leave on bad terms. He just did it a little selfishly. And neglected his girlfriend in the process.

I guess if Maggie can forgive Jackson, then fans should be able to do the same. But the last thing he needed to do after saying goodbye to April and proposing to Maggie was leave town. And some Grey's fans weren't thrilled with his return.

Jackson and Maggie's brush with death int he middle of the street prompted his sudden leave of absence from Grey Sloan Memorial Hospital and at the time, Maggie was as unhappy with him as a lot of fans were. In the episode, titled "Gut Feeling," Maggie voiced her concerns over Jackson's sudden exit.

"He said he needed to go clear his head or unplug or whatever. He has some big questions and he needed some big answers," she told Amelia. "Is there something wrong with me? I almost died too, and I feel almost lucky. He said if he told me to my face, he wouldn't be able to leave. I guess it's good? I don't know... I don't know anything, except Jackson left."

As much as fans might want to stand behind Maggie in solidarity, the truth is that she buckled pretty quickly. But at least it looks like Jackson is here to stay. In other words, no more soul searching walkabouts for him. I hope. They do make a good couple when one of them isn't questioning the relationship and the other one isn't ignoring text messages.

As long as Jackson doesn't leave on any other missions to find himself, then I see the relationship working out for the long run. Let's just hope he doesn't do her dirty again.