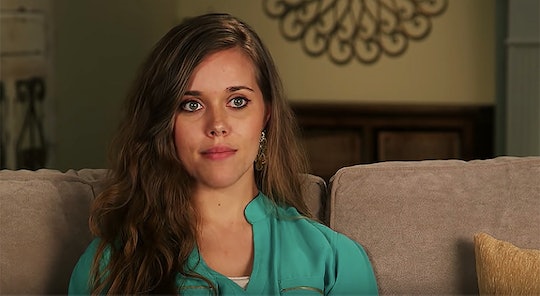 Jessa Duggar and her husband, Ben Seewald, welcomed their third child into the world on May 26. Their little girl, Ivy Jane, was reportedly born at home, but some Counting On fans are convinced that Jessa Duggar gave birth in a hospital. This theory gained traction after TV Guide published a description of Ivy's upcoming birth special, which mentioned that paramedics visited Jessa's home during the delivery.

After Jinger Duggar gave birth to her first daughter, Felicity, in July 2018, TLC aired a birth special to commemorate the special moment. The network also gave Kendra Duggar a special when Garrett was born in June 2018. So, it only makes sense that the powers that be would air a birth episode for little Ivy. The special — titled "A Baby Girl for Jessa" —  will air on June 25, almost a month to the day after Ivy was born, according to TV Guide's listing.

As for the episode description, it provides an interesting detail about the delivery, stating: "When Jessa goes into labor while her family is out of town, she and Ben have to make major changes to their birth plan and things get tense when paramedics are called."

Jessa previously mentioned that Ivy was born early (her due date was June 5), so this info isn't new. But what hasn't been touched on? The fact that paramedics were called during the delivery.

The mom-of-three didn't mention anything about the hospital in Ivy's birth announcement, but her mother-in-law did share a photo with the baby from what appeared to be a medical facility. Based on the snap, some people began speculating whether something went wrong during her plans for a home delivery.

Fans won't know for certain what happened until June 25, but a possible theory concerns hemorrhaging. Shortly after Jessa gave birth to her eldest son, Spurgeon, in November 2015, she suffered major blood loss. “I tried to keep my head, I was awake and alert,” she recalled, according to People.

Ultimately, Jessa had to stay overnight in the hospital to receive a blood transfusion, a situation that took a toll on her emotional well-being. "I had dreamed about those first moments, getting to breastfeed right away, all that," Jessa said about her disappointment. "And so when I had to go to the hospital, it was a shock.”

Jessa's experience just goes to show that you can't plan for the unexpected.

If Jessa did call the paramedics, I'm not surprised that she didn't open up about it in her blog. She deserves the opportunity to share her story when she's ready, which I assume will be when Ivy's birth special airs later this month.

In the meantime, Jessa is enjoying life as the mom of three, and is busy making sure Spurgeon and Henry are being gentle with their little sis.

“Spurgeon especially knew what was going on a little bit more I think because we’d been talking to him and he’s a little older," Ben said about the moments after Ivy's arrival, according to People. "He kind of gets it, so he held Ivy for several minutes. And Henry, he just kept saying, ‘baby,’ ” said Ben. “It’ll be fun to watch them interact. We’re going to have to teach them to be more gentle, though, because they’re pretty rough.”

Ha! I'm sure the brothers will get used to their new sibling in time — everything is a learning process.

Circling back to Jessa's special, fans can likely expect to get answers about the events following Ivy's birth when it airs on June 25. Stay tuned.