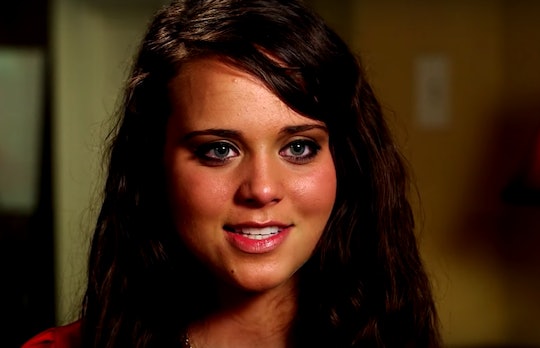 Jinger Duggar Is Officially A Mom To A Baby Girl, But Was Her Birth Filmed For 'Counting On'?

It's time to add one more branch to the Duggar family tree! On July 19, Jinger Duggar Vuolo and her husband, Jeremy Vuolo, welcomed their first child together, a daughter. Of course, fans of TLC's Counting On couldn't be more excited for the new parents. After all, the Duggars open their home to millions of viewers each week, and share so many precious and intimate moments that've gone in their lives. Which is why some people can't help but ask: Was Jinger Duggar's birth filmed for Counting On? It's entirely possible, but viewers would have to wait until next season to find out.

A Duggar daughter going through labor has been shown on Counting On before. In a June episode that aired last year, Jessa Seewald can be seen giving birth to her second son with husband Ben Seewald, according to the Daily Mail. But camera operators for Counting On weren't present to film the home birth last February. Instead, footage from a home video shot by the Seewalds played during the episode.

Jinger Duggar hasn't said whether or not she planned to film her delivery — either with TLC cameras or via home footage — but there's always a chance she may go the route of her big sister.

Of course, the news to celebrate is that Jinger Duggar gave birth to a bouncy baby girl on Thursday, July 19, in the wee hours of the morning, according to an announcement on their website.

"God is so kind! Jinger gave birth to Felicity Nicole Vuolo this morning at 4:37 am," they shared on their website. "Felicity weighs 8lbs. and 3oz. and is 19.5 inches long. Both mom and baby are healthy, doing great, and resting well. We are very thankful for her safe arrival and look forward to life as parents!"

In January, Jinger revealed she was expecting her first child in statement she and Vuolo wrote on their website, according to PEOPLE:

The past fourteen months have been the best of our lives as we have had the wonderful privilege of beginning our journey through life together in marriage. We both looked forward to the joys of marriage but neither one of us fully understood just how amazing the start of this journey would be. Truly, the Lord’s mercies are new every morning! Now, the journey has taken an exciting turn: we are expecting our first child! We are praising God for this beautiful gift and ask that you join us in praying for a safe and healthy pregnancy.

Since announcing her pregnancy earlier this year, the 24-year-old Counting On star has kept fans in the loop on her progress through updates on Instagram. Duggar posted photos of her growing bump throughout each trimester, with each shot including a chalkboard noting the date and size of the fetus as compared to a piece of fruit. Jinger Duggar's baby girl was as big as a pumpkin at 38 weeks, according to her latest Instagram update.

And just weeks later, she welcomed her daughter and couldn't seem happier to be a mom. Though Counting On fans won't know whether cameras captured her birth for quite some time — the latest trailer seems to indicate that only her pregnancy reveal was filmed for this season — hopefully she and Vuolo will keep fans updated about life with baby Felicity on social media, like they did throughout these past few months.