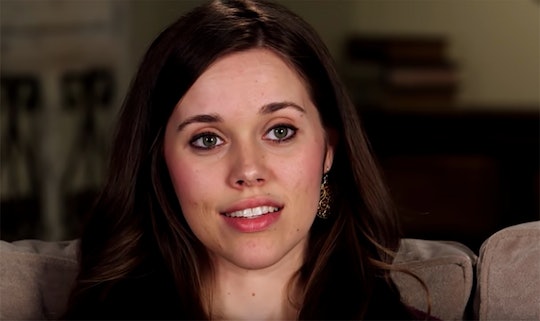 After the long Memorial Day weekend, news broke on Tuesday that Jessa Duggar gave birth to her third child. And now many Counting On fans want to know whether Jessa Duggar had a girl or a boy. After two boys, the reality star is now the proud mom of a baby girl, as Us Weekly reported. Talk about an exciting surprise!

A few weeks ago, Jessa revealed to a fan on Instagram that she and her pregnant sisters were in the midst of planning a maternity shoot. The Arkansas native seemed excited about the idea, but she also expressed some reservations about delivering baby number three before her June due date. "We are actually planning a sisters’ photo shoot with all 5 of us due this year!!!" Jessa told the curious commenter. "Hope I don’t go early and miss out."

Well, there's a good chance Jessa didn't make the shoot because on Sunday, May 26 she gave birth to her third child, a girl that she and her husband, Ben Seewald, named Ivy Jane, according to Us Weekly. “She feels so tiny compared to her siblings!” Jessa said about the baby who came into this world weighing 7 pounds and 14 ounces. “We’re so grateful to God for this precious gift. She is already so loved. Her big brothers adore her!”

Could this announcement get any cuter? I don't doubt that Ivy's older brothers, Henry and Spurgeon, are already obsessed with their new sibling. So much sweetness, so little time!

As for the baby's sex, I'm a little surprised that baby number three turned out to be a girl because the parents had initially guessed boy.

“From the day we found out we were expecting, we both guessed boy, and if our predictions are right then we already have a ton the clothing and accessories ready to pass down!” Jessa and Ben said in their January pregnancy announcement.

They continued: “At the same time, we would absolutely love it if we found out we were having a girl — though we’ve joked that we’d be starting from square one and might have to learn a few things.”

I have a feeling Jessa and Ben will learn pretty quickly that parenting a girl is very similar to taking care of a boy, but who knows.

Following the news of Jessa's delivery, many fans took to social media to congratulate the mom.

Another person commented: "I love her name!!"

"Cute name," someone else agreed.

Speaking of Ivy Jane's name, I wonder if there's any chance that Jessa took inspiration from Jamie Lynn Spears, who welcomed daughter Ivey Joan in April 2018. Although the spelling is a bit different, I think it's interesting that both Jessa and Jamie's kids have the initials of I.J. and the same first name. What a curious coincidence.

It's also possible, however, that Jessa drew inspiration from the name's potential meaning of fidelity. "Derived from an Old English word, Ivy represents fidelity (ancient Greeks gave newlyweds an ivy wreath to symbolize their faithfulness to one another)," according to The Bump.

Either way, it's clear that Jessa and Ben can't get enough of their new addition. Congrats to the happy family!