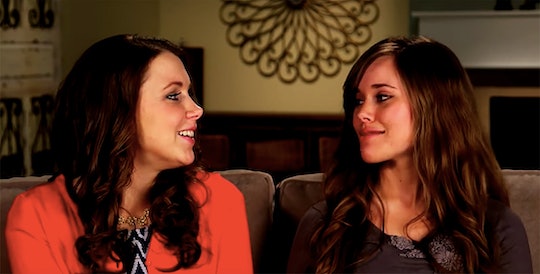 Guess What... All The Pregnant Duggars Are Planning A Maternity Shoot

A total of five Duggar women are pregnant at the moment, meaning that a baby boom is officially in the works. Considering it's not every day that multiple people in a family are pregnant at once, the Duggars are planning a maternity shoot to commemorate the sweet coincidence, as Jessa Duggar revealed on Instagram Tuesday. Not only is this a cute idea, but the upcoming photo shoot should put a stop to the rumors that other Duggars (Abbie or Jill Duggar, anyone?) are also pregnant at this time.

The first Duggar to kick off the baby boom was Jessa, who revealed in January that she's expecting her third child. "From the day we found out we were expecting, we both guessed boy, and if our predictions are right then we already have a ton the clothing and accessories ready to pass down," Jessa and her husband, Ben Seewald, wrote in a joint statement shared to the family's website.

Next up was Josh Duggar's wife, Anna Duggar, who announced in April that she's expecting baby number six. Kendra Duggar then shared that same month that she's pregnant with baby number two, while Joy-Anna Duggar surprised fans with pregnancy news in May.

Lauren Duggar closed out the announcements when she revealed on Monday, May 20, that she's expecting her rainbow baby sometime in the fall.

Phew, that was a mouthful.

Although multiple pregnancies are par for the course in the Duggar family, this number of pregnant family members is unprecedented. And to pay tribute to this exciting coincidence, the ladies are planning a maternity shoot set to take place before Jessa gives birth sometime in June.

"We are actually planning a sisters’ photo shoot with all 5 of us due this year!!!" Jessa told a fan on Instagram. "Hope I don’t go early and miss out."

As you might have noticed, Jessa said the shoot includes five people, a figure that tracks with all of the pregnancy announcements so far. If she's being honest here, then it's unlikely that Abbie or Jill will announce a pregnancy within the next month or so.

Circling back to when this photo shoot might take place, I think there's a good chance it will happen sometime this week if it hasn't already. Jessa is already 38 weeks, after all, and the ladies wouldn't want to risk an early delivery. That being said, Jessa ran five days late with her last two pregnancies.

It's not clear when the family will share pics from the photo shoot, but in the meantime, eager fans can enjoy an earlier maternity shoot featuring Joy-Anna, Anna, and Jill.

"#Throwback to when Jill, Joy & I were pregnant together!" Anna captioned the shot shared on May 2. "Currently, there are 4 Duggar sisters/sisters-in-law that have shared expectant baby news! I wonder how many more new cousins will be announced before our little one arrives?!?!"

Of course, there was additional baby news — Lauren announced her pregnancy 18 days after Anna's post.

So hang tight, folks — photo evidence highlighting the 2019 Duggar baby boom is on the way.