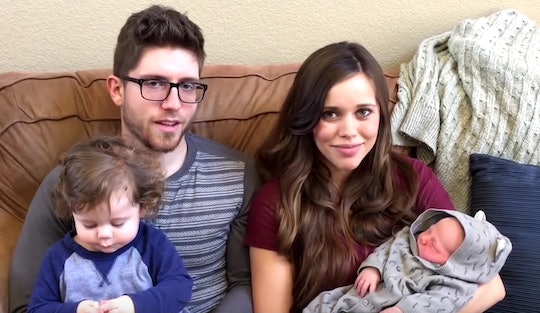 After Jessa Duggar announced earlier this month that she's pregnant with her third child, people have been itching more news about her baby-to-be. Anyone who watches TLC's Counting On knows that pregnancies are not only quite common in the Duggar family, but they are pretty fun to follow along with, too. So, it shouldn't come as a surprise to anyone that Jessa Duggar's sonogram has a bunch of Counting On fans guessing the sex of her third child — and they seem pretty confident with their theory.

On Wednesday afternoon, Duggar shared her first photos of her third child to her Instagram account (like where most things are shared these days). The black and white sonogram photos were a little fuzzy, but so adorable.

"We were so happy to finally get to see #BabySeewald3!" she captioned the photo. "Looks like this little one will have the same nose as the others."

Duggar has some experience with studying her sonograms; she is already the mom to two young boys, 2-year-old Spurgeon and 1-year-old Henry, according to People. And in the side-by-side images of baby number three to her two other boys, it's easy to see that her three children do all share the same nose.

But fans think baby number three looks just a bit differently than her other two sons, and they are pretty much convinced that Duggar is having a girl, though she has not commented herself.

"Hope it's a baby girl!" one fan commented.

"I think girl!" another added.

"Looks like a girl to me!" yet another stated.

But others can't help but to think that her new baby looks identical to her other two sons.

"Guessing boy but I want you to have a girl!" another fan exclaimed.

It's unclear if Duggar actually knows the sex of her baby and if she is waiting to tell her fans, or if she's waiting until she gives birth to find out the baby's sex. Whatever the case may be, fans will be so happy either way. And Duggar, along with her husband, Ben Seewald, seem to think the same thing. As the mom-to-be told People earlier this month:

From the day we found out we were expecting, we both guessed boy, and if our predictions are right, then we already have a ton of clothing and accessories ready to pass down! At the same time, we would absolutely love it if we found out we were having a girl — though we've joked that we'd be starting from square one and might have to learn a few things.

Since fans have watched their journey to becoming husband and wife to becoming parents on the shows, 19 Kids & Counting and Counting On, it makes sense why they would be so invested. Just last year, Seewald and Duggar talked openly on Counting On about wanting to become parents to three young kids under the age of 3.

This openness will likely continue on Duggar's Instagram account throughout her pregnancy, where she is already updating fans about "#BabySeewald3." Not to mention, the newest season of Counting On airs next month, and it is very possible that Duggar will talk about her pregnancy there.

The Duggar family always seems to surprise fans with their announcements — and whether she has a girl or a boy, Duggar fans will be delighted for Jessa's bundle of joy to arrive.