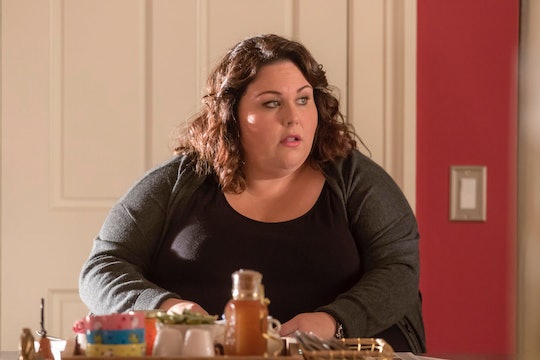 Kate May Have Started The House Fire On 'This Is Us'

For a while, the big question on This Is Us was, how did Jack die? Now that fans know it had something to do with the Pearson family home being set on fire though, the new burning question for some may be: did Kate start the fire on This Is Us? Of course if she did, it would have been totally unintentional, but since she still blames herself for Jack’s death after all these years, it does make you wonder what role she played in the fire that may have claimed his life.

This Is Us creator Dan Fogelman did confirm during a pre-season Emmy event that the Season 2 premiere would bring some answers about Jack’s death and that "a huge piece of the puzzle" would be revealed. And since you have to assume he was referring to the fire, it means that Jack very likely died as a result of the house fire. And if Kate was somehow responsible for starting said fire, then that would make sense as to why she feels so guilty. If the house fire is indeed linked to Jack’s death and Kate is partly to blame, even if indirectly so, then there are a few ways for Kate to be at fault for the house fire on This Is Us.

Kate, as a rebellious teenager, could have been smoking in the house and as a result, accidently caused the fire, Then Jack, being the heroic super dad that fans have come to compare all other dads to, died trying to save her or someone else in the fire. It would definitely explain why, in Season 1, Kate told Toby of Jack’s death and remarked, "It’s my fault." Though if I’m being honest here, there’s probably no one other than Kate who actually blames her for Jack’s death, or even the fire, since she was just a teenager at the time.

If that isn’t the case, though, the fire could have still started in Kate’s room in another way, possibly by a curling iron or candle. But, as Redditor gem_bug pointed out, the firefighter at the end of the This Is Us premiere is seen pointing toward the kids’ rooms rather than the master bedroom of the burned down house. This would add fuel to the theory that Kate started the house fire, regardless of how it may have happened.

There’s also the possibility that Kate didn’t start the fire at all. If all of the smaller details in the season premiere, like Kevin’s cast and Kate’s dog, are meant to be important too, then maybe the answer about Kate’s guilt lies with her dog. It’s totally possible that, as this Time.com theory goes, Jack ran into the burning house to save Kate’s dog for her and later died by causes related to the smoke and fire. This would explain her guilt, but also mean that she didn’t actually start the house fire.

Since more of the details about Jack's death on This Is Us are bound to come out as the season progresses, there are sure to be more flashbacks to also give some insight into what causes Kate's guilt. But whether or not that means she's to blame for the actual fire in the Person house is still up in the air as far as fans are concerned. And since there’s so much viewers don’t know, it’s difficult to say for sure just yet how Kate's role in all of this will play out.