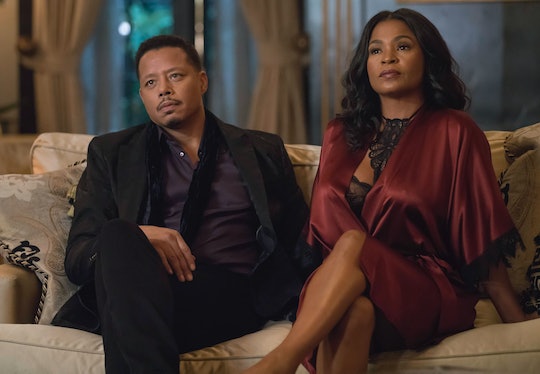 Lucious & Giuliana Have History On 'Empire'

At this point in the show, you better believe that if anyone new comes into the fold, they’re somehow connected to the characters already. It just wouldn’t be Empire if that wasn’t, for the most part, true. And it seems like the newest business partner, Giuliana, already has a past with the Lyon patriarch, so did Giuliana and Lucious date on Empire?

They definitely seem to have a past that viewers haven’t yet seen and even before she asked him to play the song he wrote from her, the promos for the second half of the season made it seem pretty clear that Giuliana and Lucious already know each other. And if he wrote a song for her in the past, then they had to have been a thing.

The song, "You’re So Beautiful," that’s been known as his song for Cookie since forever, but evidently Cookie wasn't the only muse Lucious has had over the years. I'm thinking Giuliana came into Lucious' life when Cookie was serving time in prison. It would make sense that Giuliana was Lucious’ Cookie fill-in while she was locked away and he was building his career and apparently not using any of the millions he earned over the years to get her out. As always, real classy, Lucious.

But Giuliana’s confidence and attitude is kind of reminiscent of Cookie, meaning that it would make sense for Lucious to have had something with her long ago. Will we get a flashback of the early days of Lucious’ career, as he took care of his sons and built his empire? The show has never been stingy with showing viewers the pasts of both Cookie and Lucious, so that may very well happen to help fans understand how close Lucious and Giuliana were back in the day.

And if he really did create a song that was inspired by her, then they were definitely serious on an emotional (and probably physical) level. The promo for the second half of Season 3 of Empire also showed Giuliana pointing a gun at him, so whatever went on between them obviously ended badly.

With Lucious, that seems like the only way to end a relationship, but given that the two obviously have a history together, it looks like her intentions with partnering with Empire may have nothing to do with benefitting the company at all. Perhaps she's playing a long con in an attempt to get revenge of her former flame.