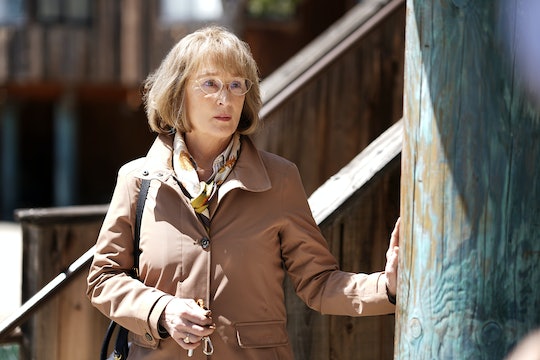 I'm All Over This 'Big Little Lies' Theory About Perry's Father

After two excruciatingly long years, HBO's Big Little Lies is back. With more secrets than ever before, what's slowly unfolding in Season 2 has fans on the edge of their seats. As if there wasn't enough going against the "Monterey Five," Perry's mother, Mary Louise (Meryl Streep) showed up and she's not bending to everyone's expectations of who they want her to be. There's a lot of speculation about the trouble she might cause, but there's one Big Little Lies theory I can't stop thinking about. Did Mary Louise kill her husband? Here's my take.

The no-holds-barred, grief-stricken matriarch to the now deceased Perry (Alexander Skarsgård) has decided to make a home in Monterey, despite Celeste's (Nicole Kidman) apprehension. As any mother would, Mary Louise is determined to get the truth out of someone about how Perry died. She isn't buying the whole "he tripped and fell" thing, and I don't think I would either. That aside, Streep's portrayal of Mary Louise is quietly sinister is the best kind of way. This brings me to the aforementioned theory about Mary Louise I can totally get behind.

If you'll remember back to Season 1, Perry was confronted by the woman he raped, Jane (Shailene Woodley), witnesses, Madeline (Reese Witherspoon), Renata (Laura Dern), and the one who pushed him down a staircase — Bonnie (Zoë Kravitz), after they caught him abusing Celeste. All of this happened during Trivia Night, and to protect Celeste from more of Perry's abuse. It was, as they say, a moment of fiery rage that ended in a tragic death. Some fans think there are plot holes linked with how the women have explained the circumstances away, saying they each could've pleaded self-defense. Instead, for whatever reason, their lips are sealed. No, but really — there's one fan theory circulating that suggests the BLL promotional poster foreshadowed the silence of the Monterey Five, with Meryl Streep's lips perfectly visible. Seeing the peculiar way Mary Louise interacts with the others in search for the truth, I have to agree that she may be the whistle bower this season. But does that make her a murderer?

Up to this point, little is known about Perry's upbringing. Mary Louise provides some insight as to how he could've gotten away with abusing Celeste. If his mother refuses to acknowledge the truth of who he is, he's unlikely to change. That brings me to Mary Louise's confused behavior. Her mood violently shifts from loving and calm to an undercutting, rude, and intrusive mother-in-law, even going so far as to claim Celeste may have done something to deserve the abuse. While the looming mystery surrounding Perry's death is very likely eating away at her, it could be for a few reasons not yet shown (one being, what the heck happened to Perry's brother?). Perry could've learned how to be abusive from how she treated him throughout his childhood. She's quick to change directions in both tone and attitude — something Perry excelled at with Celeste. That still wouldn't explain whether she'd have killed her husband unless, like Perry, she became so violent it ended in his death (even if on accident). That would mean her curiosity with the five women may lean more on the "I'd like to get revenge" side of things.

Or, Mary Louise could've been the subject of abuse by her husband. Perry could've learned about abuse through him, and maybe Mary Louise snapped one day the same way Bonnie snapped when she pushed Perry down the stairs. An alternate theory could be that Perry saw Mary Louise being abused by his father, and he's the one who killed him. Honestly, with how odd the woman is, and how cruel Perry could be, I can't rule anything out.

It's hard to say for sure if Mary Louise killed her husband at this point, but the theories are getting pretty wild. Don't even get me started on Bonnie and her visions of drowning. The harsh reality is, Mary Louise has a bone to pick and she won't stop until Perry's death is avenged. Unfortunately for the Monterey Five, I don't think she's going anywhere anytime soon.