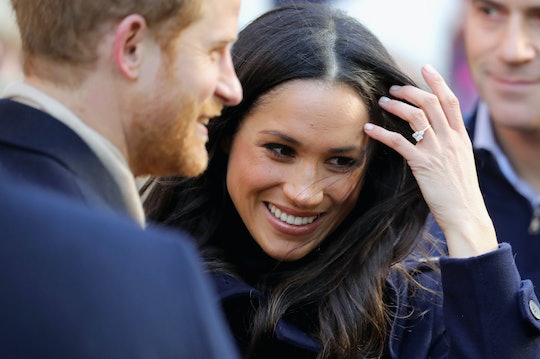 You can officially stop placing bets and guessing about the sex of Prince Harry and Meghan Markle's royal baby, because Baby Sussex is finally here. News broke today that the Duchess of Sussex has given birth to her and Prince Harry's first child, and if you're wondering whether Meghan Markle had a boy or a girl, well... wonder no more.

Palace officials announced today that Prince Harry and Markle are officially parents to a baby boy, thereby officially putting an end to months of speculation and bets.

The statement continued, "The Duchess and baby are both healthy and well, and the couple thank members of the public for their shared excitement and support during this very special time in their lives. More details will be shared in the forthcoming days."

As is tradition with royal pregnancies (and any A-list celebrity, high profile pregnancy, for that matter), there was a lot of speculation about the sex of Markle and Prince Harry's baby. Bookies on the other side side of pond even had to "[pull] all bets" on the sex of Baby Sussex long before Markle even gave birth, according to Hello! Magazine, as they had received an "avalanche" of bets that the baby would be a girl, indicating that some key info may have been leaked.

Even one of Markle's friends had presumably dropped a hint about the baby's sex weeks before Markle gave birth. Early in April, while Serena Williams, who attended Markle and Prince Harry's royal wedding in May 2018, was chatting with E! News about a pregnant friend, who she did not name, the tennis pro casually used a female pronoun. Williams told E! News, "My friend is pregnant. And she was like, ‘My kid’s gonna do this,’ and I just looked at her and was like, ‘No, she’s not. No, you’re not.'"

Prince Harry also ignited a wave of speculation early on in Markle's pregnancy back in October when he told a royal fan that he was hoping their baby was a girl. According to Vanity Fair, when a royal fan yelled out to the Duke of Sussex, "I hope it’s a girl," Prince Harry adorably responded, "So do I!"

Even though Prince Harry may have let royal fans think he was hoping for a girl, it's been clear all along that they'd be happy no matter what. And, what's more, they've long been planning on raising their child to be a feminist, regardless of the sex.

While Markle was speaking at an International Women's Day panel in March, according to People, the duchess was asked, “How is that bump treating you?” To which Markle responded, “Very well! It’s funny, I’ve actually been joking in the past few weeks… I had seen this documentary on Netflix about feminism and one of the things they said during pregnancy is, ‘I feel the embryonic kicking of feminism.’"

She added, according to Reuters, "I loved that, so boy or girl, or whatever it is, we hope that’s the case."

Although the world wasn't privy to many details about the Duke and Duchess of Sussex's first child before their birth, it was always clear their baby would be adored and raised to fight to good fight.

Welcome to the world Baby Sussex!