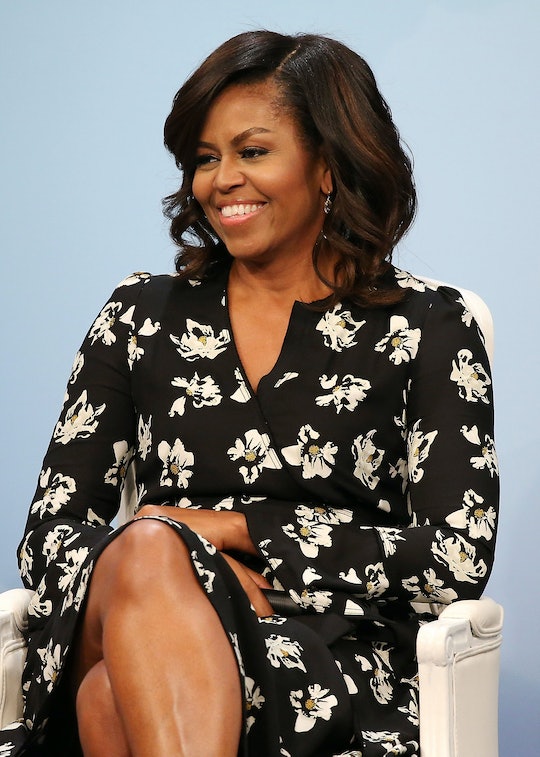 Did Michelle Obama Do An Anti-Hillary Clinton Ad? Donald Trump Thinks So

During the second presidential debate on Sunday night, Republican nominee Donald Trump said that Michelle Obama did an anti-Hillary Clinton ad way back in 2008. "I've gotten to see the commercials that they did on you," Trump said. "And I've gotten to see some of the most vicious commercials I've ever seen of Michelle Obama talking about you, Hillary." It was a throw-away comment, meant to topple Clinton off her game, since recently the first lady has been on the campaign trail stumping for Clinton. And while the two women probably aren't hanging out getting mani-pedis together, they seem to respect each other for sure.

So what the heck was Trump talking about? Well, back in August 2007, Michelle spoke at a Women for Obama South Side Community Kickoff in Chicago and said, "One of the things, the important aspects of this race, is role modeling what good families should look like. And my view is that if you can't run your own house, you certainly can't run the White House. Can't do it." At the time, that comment seemed appeared to be an obvious swipe at Hillary Clinton and her marriage to former President Bill Clinton. But it was never in any ad used by the Obama campaign against Clinton in 2008. So what, again, is Trump talking about?

This is where it gets tricky.

Michelle said sort of the same thing at another event, too, in Iowa, but the Obama's have always denied that they were a veiled reference to his opponent.

There is a commercial out there that uses Michelle's words from that event against Hillary Clinton, but it was created and distributed by a Trump Super Pac and not President Obama's campaign.

The ad was created by Make America Number 1 which is run by Rebekah Mercer, whose father is a hedge fund billionaire who initially supported Texas Sen. Ted Cruz. So Trump was half right, as he sometime is, in saying that there was a commercial out there with Michelle Obama saying things that may or may not be related to the Clintons. But Trump was super misleading during the debate, since he made it sound like the Obama campaign was responsible, way back in 2008, when the two were opponents.

Whatever Trump tried to pass off on Sunday, the Obama's never released that ad. So while Trump himself may think the best way to throw his opponent off is to concoct stories meant to pit her against the current president and first lady, when it comes down to it, it's all just a farce.