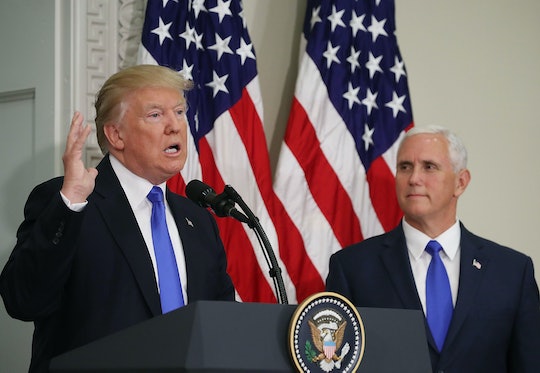 In three tweets heard around the world Wednesday, President Trump announced that he is banning transgender Americans from serving in the military. The tweets seem to come out of the blue, but they confirmed the worry that many trans people and their allies have had about Trump since he chose ultra-conservative Vice President Mike Pence as his running mate during the 2016 presidential campaign, that the Trump administration is fundamentally opposed to the rights of LGBT people. So it's no wonder that many people are asking whether Mike Pence convinced Trump to ban trans people from the military.

Romper reached out to Vice President Pence's office for comment and has yet to hear back, but given Pence's history, it's not a farfetched question. When Trump selected Pence in 2016, TIME rounded up all of Pence's statements about LGBT people and rights over the course of his career. He has said, in no particular order, that being gay is a choice; that homosexuality leads to the "deterioration of marriage and family" and could bring about subsequent "societal collapse"; that laws protecting LGBT people from employment discrimination violate the religious freedom of employers; and argued that whether trans people can be banned from using the restroom in which they feel most comfortable should not be decided by the federal government. Pence has also specifically weighed in on whether LGBT people have a place in the military. He was a proponent of "Don't Ask, Don't Tell" and told CNN in 2010 that allowing openly LGBT people to serve in the military would make it "a backdrop for social experimentation."

When Trump chose Pence as a running mate, many voiced concern over Pence's record on LGBT rights, especially in light of the fact that Trump himself seemed not to share many social conservatives' intolerance toward LGBT people. There was significant concern that Pence would push Trump toward policies that infringed upon gay, queer, and trans' citizens hard-won rights.

During the campaign, Trump sought to alleviate those fears by mentioning the LBGT community in his speech at the Republican National Convention, which no Republican has done before. He said,

Only weeks ago, in Orlando, Fla., 49 wonderful Americans were savagely murdered by an Islamic terrorist. This time, the terrorist targeted our LGBTQ community. As your president, I will do everything in my power to protect our LGBTQ citizens from the violence and oppression of a hateful foreign ideology.

After Trump took office, his daughter, Ivanka Trump, and her husband, advisor Jared Kushner, were said to be a pro-LGBT influence on Trump, their presence supposedly counter-balancing efforts to push the president toward more draconian policies. In February, The New York Times reported that the couple had successfully squashed plans for a Trump executive order that might have withdrawn some LGBT rights protected under the Obama administration under the auspices of protecting the religious freedom of others. The Times reported that Pence didn't push for the order to be signed.

But Pence has evidently been pushing an anti-LGBT agenda since. In a statement Wednesday morning, the LGBT advocacy organization GLAAD referenced a Tuesday report in Foreign Policy stating that Pence's office has been "working quietly" to convince Congress to walk back the Obama-era decision to cover medical benefits for transgender service men and women. Members of Pence's staff have reportedly urged members of Congress to include an amendment in the military spending bill that will "provide medical treatment related to gender transition."

Given the timing, it's hard to believe that Pence's agenda didn't influence Trump's announcement of a policy that will deprive trans Americans, who are twice as likely to join the military, from serving. On Twitter, at least, people were fairly convinced that the ban is Pence's doing:

Regardless of Pence's role in the announcement, it sends a very clear message about the whole administration's attitude toward trans people specifically and LGBT individuals in general. What the rest of the country decides to do about it remains to be seen.