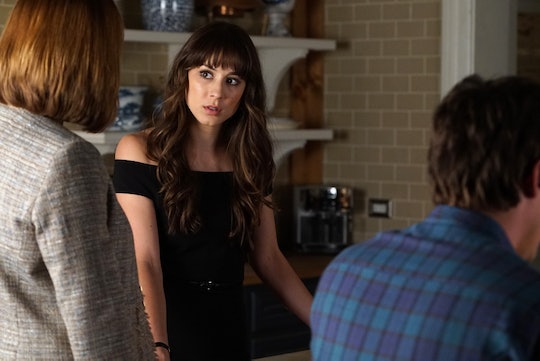 Did Spencer Have An Abortion On 'Pretty Little Liars'? Something Important Happened During The Time Jump

We have yet to learn everything that happened in the Pretty Little Liars time jump that skipped the five years leading into Season 6B, but we're getting there. More often than not, when things in the present relate to a situation in the past, we get a well-deserved flashback that shows us what happened and what we missed. So, when Spencer learned that Yvonne had an abortion on PLL, fans were given a quick flashback that showed Spencer and Toby dealing with their own pregnancy test.

The scene, no matter how quick, might have made you wonder if Spencer and Yvonne shared more than just a boyfriend. In the flashback, we learn that Spencer had to take a pregnancy test her sophomore year in college. While she and Toby sat and waited for the test to be ready, they talked about their future. Spencer was clearly not ready for a baby, while Toby wasn't completely against it, saying that it was something that he saw in their future.

But was the test actually positive, and does that mean that Spencer had an abortion? According to present-Spencer, she did not have an abortion because she was not pregnant. She notes this while defending herself when the blame is turned on her for possibly leaking Yvonne's medical records.

This scene is important to note because it is starting to build a timeline of what went down in the five years we missed. While the show has covered the major gaps — who broke up, who was released from hospitals, etc. — we missed these little moments that fans loved so much. This moment in particular was probably bittersweet for Spoby shippers. While we got to see a Spencer and Toby scene, we also saw a scene that laid the groundwork for why they're no longer together.

This scene also put into context why Spencer would never dream of leaking Yvonne's personal medical information. She knows, being a woman who might have needed to make the same decision, how personal and private that is. Sure, Yvonne is on the other side of the campaign, but Spencer knows that boundaries are boundaries, and this is a line she would never cross.