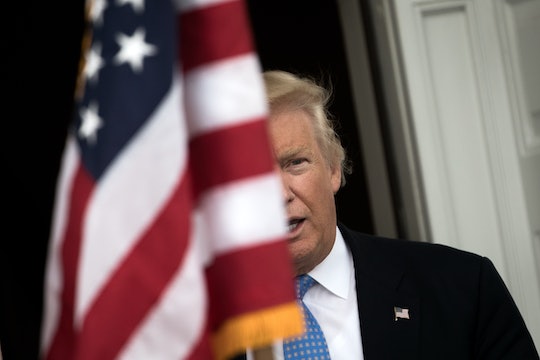 Did Trump Really Change Positions On Torture? It Appears He Still Feels The Same

In a move that surprised no one, Donald Trump reportedly told The New York Times during a sit-down with the paper's editors and reporters this week that he's still all-in for waterboarding. So, despite contradictory reports and the fact that the man the president-elect may nominate as secretary of defense reportedly told him he "never found it to be useful" in eliciting information from the military's enemies, Donald Trump has not changed his position on torture. Trump has proved over and over again that he is not going to perform the elusive "pivot" that much of the nation so desperately needs, at least when it comes to many of his racist and supremely uniformed stances — and this complicated moral, ethical, and scientific issue is no exception.

News that Trump may have signaled a softening in his enthusiastic advocacy of reinstating of such inhumane (and, arguably, ineffective) "enhanced interrogation" techniques emerged when he told the Times he was "impressed" with Gen. James Mattis' take on the the question. "'Give me a pack of cigarettes and a couple of beers, and I’ll do better,'" Trump recalled Mattis, a frontrunner for the defense secretary position, a retired Marine Corps general, and a 44-year military veteran, telling him. That, of course, is according to a transcript of the meeting Trump held with The Times. Mattis, apparently, has determined from his extensive military experience that establishing a rapport with prisoners a more reliable means of extracting from them vital information.

Trump's apparent perceptiveness to this perspective prompted some media outlets to run articles claiming that the soon-to-be Commander in Chief had reversed himself on the issue. Foreign Policy, for example, posted a piece Tuesday bearing the headline "In Stunning Reversal, Trump Scraps His Calls to Bring Back Torture." But as Slate's Fred Kaplan points out, Trump actually filed away the opinion of a person who knows much, much more about the military than he does, regurgitated it back to the Times, and then doubling down on one of his many incendiary campaign promises. "And when he said that, I’m not saying it changed my mind," Trump said soon after recounting Mattis' views, according to the transcript.

Look, we have people that are chopping off heads and drowning people in steel cages and we’re not allowed to waterboard. But I'll tell you what, I was impressed by that answer. It certainly does not — it's not going to make the kind of difference that maybe a lot of people think. If it's so important to the American people, I would go for it. I would be guided by that. But Gen. Mattis found it to be very less important, much less important than I thought he would say.

In other words, it appears that the man who is about to become the next president of the United States has admitted that he would be "guided" by Americans who want to see waterboarding, a simulation of drowning, and many other horrors practiced by the military. This despite the fact that there is no real evidence that torture even works — but no shortage of research that suggests that it could actually be detrimental to the task of extracting potentially lifesaving information from terrorists, for example. (The Trump transition team did not immediately respond to Romper's request for comment and clarification on the issue.)

In a 2010 column for The Guardian, researcher and science writer Martin Robbins laid out some of the science-backed reasons torture isn't the essential tool some believe it to be, like that memory is unreliable and even less so when a person is subjected to stress — such as torture.

But most convincingly, Robbins writes that torturing a person is, ultimately, a really good way to get them to tell you exactly what you want to hear. He cited the observation former FBI agent Ali Soufan, who has experience interrogating al-Qaeda operatives and who discussed the pitfalls of torture with Time's Bobby Ghosh in 2009:

When they are in pain, people will say anything to get the pain to stop. Most of the time, they will lie, make up anything to make you stop hurting them. That means the information you're getting is useless.

Still, Trump has consistently advocated for the reimplementation of waterboarding, and other forms of torture throughout his campaign. At a campaign rally in Columbus, Ohio, last year, he told the crowd that "only a stupid person would say it doesn't work."

"Would I approve waterboarding? You bet your ass I would — in a heartbeat," he said at the time, according to The Washington Post. "And I would approve more than that. Don't kid yourself, folks. It works, okay? It works."

Although most American generals and admirals share Mattis' more conservative views on waterboarding, Trump is filling his administration with men who have come out in favor of it, including Vice President-elect Mike Pence, and his picks for national security adviser and C.I.A. director, Foreign Policy reported.