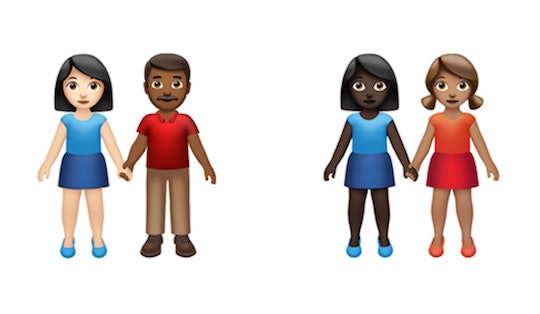 Representation matters. Representation matters in movies, in music, in media, and yes, right at your fingertips. In 2019, emoji constitute a large percentage of how we communicate with one another, and seeing images that accurately represent different people and relationships cannot be stressed enough. That's why different skin tone emoji for couples will be available soon, as Apple announced recently, because "holding hands" is for everyone.

Apple will be releasing many new emoji come this September's iPhone update, according to a press release celebrating World Emoji Day on July 16. And the most exciting? The "holding hands" emoji, in which two people are standing next to one another, palms linked, will now be expanded to over 75 combinations to accommodate different variations of genders and skin tones, "[encouraging] more inclusion and diversity."

Apple's press release noted that iPhone users will soon be able to select "any combination of skin tone, in addition to gender, to personalize the people holding hands" emoji, calling it one of many "powerful updates."

There will also be more emoji to represent individuals of mixed ability as well. "Following Apple’s proposal to the Unicode Consortium last year to introduce more disability-themed emoji, a new guide dog, an ear with a hearing aid, wheelchairs, a prosthetic arm and a prosthetic leg will be available in the emoji keyboard," the press release noted. "Celebrating diversity in all its many forms is integral to Apple’s values and these new options help fill a significant gap in the emoji keyboard."

Earlier this year, the Associated Press reported that more diverse couple emoji were approved at Emojination, or the Unicode Consortium that Apple mentioned, which is essentially the board that oversees the creation and distribution of emoji across different apps, sites and companies, such as Google, Microsoft, and Apple.

Speaking to the Associated Press, co-founder of Emojination Jennifer Lee reiterated the importance of more globalized representation in technology. "Unicode is taking user demand for more skin tones across emoji very seriously," she told the news outlet. "The additional of skin tones, gender variations, hijab and hair styles are part of users around the world demanding to see themselves represented on the emoji keyboard. Diverse couples and families are part of that."

Though it would appear that the progress is a net positive for humanity (and, honestly, it is) some people have been critical of the update, suggesting that it's fodder for "identity politics," insinuating that the updates are unnecessary. However, social media — and Twitter in particular — has wasted no time clapping back at the discourse, noting that, similar to other forms of diversification — being more inclusive does not take anything from anyone, it simply adds.

As one person responded to a critic on Twitter, "There are NINE different envelope emojis... and you think the ones of actual people are excessive? You’re mad that humans are more diverse than envelopes?"

To be clear, representation is important for everyone, as it is validating, affirming, and makes otherwise marginalized groups feel as though they, too, belong and are seen. The expansion of these emoji does not eliminate or take anything from anyone else, it simply makes more people feel that they can accurately be seen, and communicated with. All in all, it's a major step forward.