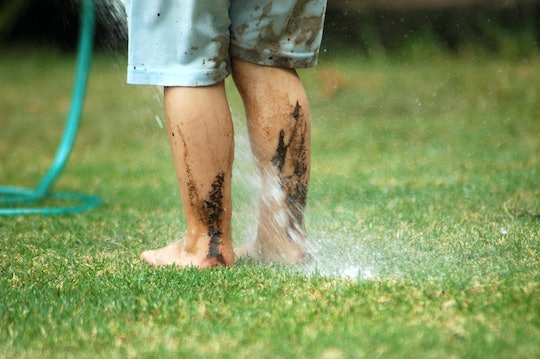 Put Down The Wipes: It's Actually *Good* For Your Kids To Get Muddy & Filthy Outside

It can feel like a natural parental instinct: If one’s toddler is rolling around in the yard, mud smeared on their hands and cheeks like a little Mowgli, of course Mom wants to immediately bust out the wipes. But there's a lot of evidence that says dirt is good for kids.

Most parents have watched a bit of muffin fall from their kid’s mouth onto the sidewalk, and then watched as their child cheerfully plucked up the wad of goo and popped it back onto her tongue. Upon witnessing this, there can be an instant desire to firehose a stream of Purell straight into the kid’s face. Same goes for when a friend's terrier licks all over your kid's cheeks. Our days are spent trying to keep our kids clean and healthy, and dirt just naturally seems like the enemy. But it absolutely is not. Dirt is our friend. Our gross, gross friend.

Romper spoke with Dr. Jack Gilbert, one of the co-authors of Dirt Is Good: The Advantage of Germs for Your Child's Developing Immune System. His book explains how exposing children to the microbes found outside help a child to develop a strong, healthy immune system. Today's children not only spend less time outside, but their indoor environments are often over-sterilized, giving children hyper-sensitive immune systems, which in turn can lead to things like allergies, eczema, and asthma.

Dr. Gilbert says to bring on the yuck: "Your child's immune system needs to see foreign antigens, including those on bacteria and viruses." And when you do want to wash your kid's hands, he's a fan of good old-fashioned soap and water. "You really don't need to carry a sanitizer around with you, just make them wash their hands before they eat dinner — it's only polite."

But again, don't overdo it. "Washing hands too much breaks down the skin's barrier and can make their skin damaged, and more susceptible to infections and allergic reactions. So use common sense."

He also recommends people use environmentally-friendly cleaning agents in the home, and don't over-sanitize. "If you want to bleach around toilet bowls etc. to get rid of smells, then that's fine. The key thing is to ensure that your home is not sterilized top to bottom. Open windows (if you don't live in an overly polluted area) as often as possible (dependent on the temperature), or just make sure your kids get a lot of outdoor exposure. Let them get dirty in the woods."

Another good way to get those microbes into your kid's system? Pets. So unless you already know your kid is allergic, letting her roll around with Rover is a thumbs up. "Just being physically around animals is good — dogs appear to be better than cats, but it is hard to quantify," says Gilbert. "We think our immune systems actually evolved to best interact with furry pets, so pet rodents, rabbits, dogs, and cats are likely all good. Again, no problems washing their hands, when they interact with the animal they are breathing in millions of microbial cells which are all doing good things for their immune response."

But how to know the difference between good dirt and bad dirt? Again, Gilbert urges common sense. "If your baby is playing in the backyard and you see them picking up animal feces and eating them, then you might want to stop that. Or if you see them eating soil that is contaminated with arsenic because your house was built on the site of an old arsenic factory... well then!"

Got it. So no arsenic or feces. Done. And the whole eating off the floor business? Again, not that big a deal. I told Dr. Gilbert about how I recently watched my son's friend drop her pizza on the floor of a New York City pizzeria, then pick it back up and eat it. I waited for Gilbert to gag, but he of course was totally chill about it. "Definitely not bad for the child. They have a greater probability of dying in a car accident on the way to the pizzeria than they ever would of being the one kind in American to get an infection off the floor. It is far more likely that a chef in the restaurant has an infection and doesn't wash his hands and infects the child with a food borne pathogen. I would generally lick the floor to prove to you that (unless you are immune compromised) there is not much on most floors to cause concern."

I briefly entertained the idea of taking the good doctor on a tour of Manhattan, challenging him to lick various surfaces. I think it could make a good reality show: The Dirty Doc. Putting a pin in that genius concept.

"But again," Dr. Gilbert continues, "if you are in a toilet stall and you suspect that someone with diarrhea has recently been in there — don't lick the floor. If you are in an abattoir — don't lick the floor. But somewhere in a restaurant in a city....extraordinarily doubtful that anything will happen. In fact, by reducing your child's exposure, you run a much greater risk of making them allergic."

Got that, parents? To review: One, don't fear dirt. Two, turn off the Moana and haul your kid to the park. And three, no licking diarrhea floors.

More Like This
What Age Do Kids Start School? Here’s What You Need To Know
6 Mindfulness Activities For Kids
Everything Parents Need To Know About Monkeypox
12 Helpful Tips For Hiking With Kids