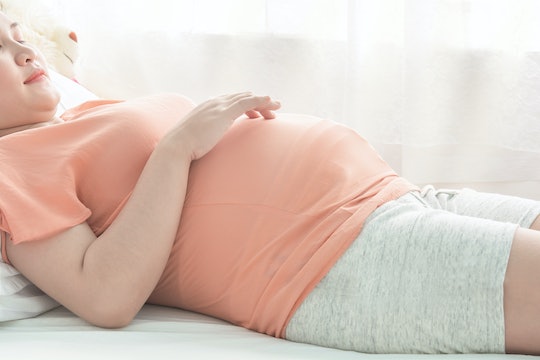 3 Vaginal Discharge Changes To Look For During Late Pregnancy

There’s a long list of bodily changes women go through when they get pregnant, and that includes their vaginal discharge. There are a few things discharge in late pregnancy can mean, but most of them aren’t negative. They’re just signs you’re getting closer to meeting your baby.

Before pregnancy and throughout, discharge isn’t just an inconvenience that forces some women to purchase bulk packages of pantyliners. It actually serves a purpose. “Vaginal discharge serves as a lubricant, and we tell people the vagina is a self-cleaning oven, and the discharge keeps your pH where it should be and decreases infection risk,” Danielle Jones, MD, an OB-GYN at Baylor Scott & White Health in College Station, Texas, tells Romper. “The most common change people notice during pregnancy is that discharge increases quite a bit. As long as it’s not associated with pain, itching, or bleeding, it’s typically an expected event.”

Deborah Cuadra, MD, obstetric hospitalist at Mease Countryside Hospital in Safety Harbor, Florida, tells Romper that most women experience an increase in discharge when they become pregnant. “When you get pregnant, there’s usually an increase in discharge. It’s usually milky white. In general, discharge increases during pregnancy because there’s a lot more blood flow to that area, so like a nose, you make more ‘snot.’”

As the third trimester wears on, expectant mamas may notice a few changes to their discharge. While some are expected, some aren’t, so it’s important to know the differences. Here’s when you should start packing your hospital bag, get to the delivery room now, or call your doctor for a checkup.

More Like This
Can You Bowl While Pregnant? Experts Weigh In
Considering Getting A Tattoo While Pregnant? Here’s What To Know
What You Need To Know About Bed Rest & Oral Sex
Pitocin Induction: What It Is & The Play-By-Play