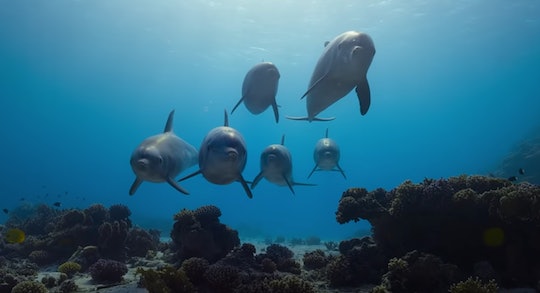 Not only is it narrated by award-winning actress Natalie Portman, but Disney+'s new documentary called Dolphin Reef tells a touching story about a young bottlenose dolphin who's learning to grow up. Set in a gorgeous "underwater wonderland," the documentary from Disneynature is sure to leave the whole family with a bit more knowledge about the intelligent species and a whole bunch of goosebumps.

Dolphin Reef, which comes to Disney+ on Friday, April 3, follows a young Pacific bottlenose dolphin named Echo "who's more interested in exploring his coral reef home, and its intriguing inhabitants, than learning to survive in it," according to the film's description from the New York International Children’s Film Festival. However, throughout the documentary, Echo learns some important life lessons from his family and has a few "close encounters with some of the ocean’s greatest predators."

"Dolphin society is tricky, and the coral reef that Echo and his family call home depends on all of its inhabitants to keep it healthy," Disney says of the documentary. "But Echo has a tough time resisting the many adventures the ocean has to offer." In the end, however, Echo learns to embrace his role in life and in his community.

Disney+ is releasing Dolphin Reef as part of its Earth Month collection, which will also feature Elephant, a documentary narrated by the Duchess of Sussex, Meghan Markle. Elephant follows an African elephant named Shani and her son as they make a journey across the Kalahari desert with their herd. The collection also includes Penguins, a Disneynature feature film that debuted in theaters last year.

Disney+ is also releasing three different behind-the-scenes films on April 3 to give viewers a look inside the "unique filmmaking process" behind these animal documentaries. So, yes, your April movie marathon is more than set.