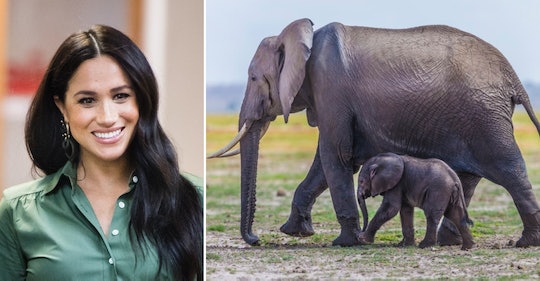 Leave it to Meghan Markle to find the most perfect project to throw herself into after stepping back from her senior royal role earlier this year. Disney confirmed on Thursday that Markle will narrate a touching Disney+ documentary that follows one elephant family's journey, including a mother and her son. As a mom to her adorable 10-month-old son Archie, a philanthropist, and animal rights advocate, this new gig appears to tick every single box.

On March 26, Disney+ announced that Markle, a former actress who worked on the series Suits for several years, has narrated the upcoming Disneynature documentary Elephants. The documentary follows an African elephant named Shami and her "spirited" son Jamo as their herd travels hundreds of miles across the Kalahari desert following the matriarch Gaia. The documentary is set to start streaming on Disney+ on Friday, April 3, and sounds as though it will be a must-watch for everyone in the family.

Markle's involvement in the Disneynature project will benefit the charity Elephants Without Borders, a wildlife organization "dedicated to conserving wildlife and natural resources" the Duchess of Sussex already knows quite well. In 2017, she and Prince Harry visited Botswana to help Dr. Mike Chase, who works with Elephants Without Borders, where she got up close and personal with the glorious creatures. And back in August, the couple shared photos from that trip in 2017 to honor World Elephant Day, showing Prince Harry carrying supplies to an elephant in an effort to fit it with a satellite navigation collar meant to help keep their migratory paths open and safe.

Markle's narration of Elephants marks her first job since announcing that she'd be leaving her senior royal role back in January. Earlier this year, she and her husband Prince Harry announced that they'd become "privately funded members of The Royal Family with permission to earn their own income and the ability to pursue their own private charitable interests." There had been a lot of speculation about what kind of role Markle might look for, although The Times reported back in January that Markle had signed a deal to do voiceover work to benefit Elephants Without Borders, and it seems they were right.

Now all we have to do is wait until April 3 to hear Markle narrating the story of a mother and son making a long, difficult journey to find a home where they can live in peace. How beautifully fitting.