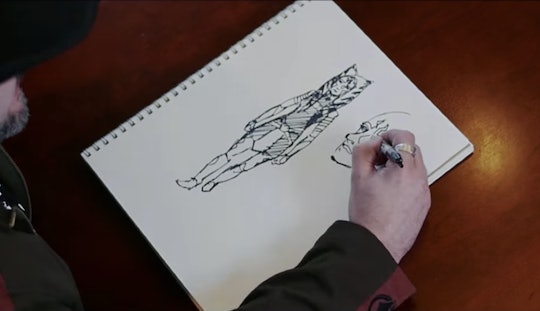 Some days, I really wish I got to be a kid again. Usually it's on days when I have to pay my own bills or cook my own food, but today is different. Because Disney has finally given female Star Wars characters their own animated series, and if I were still a kid, I would be all over that action. Because as much as I loved my Princess Leia action figure back in the day... she didn't have a light saber. Or her own show. So... you know, it just wasn't the same.

Disney announced on Thursday, in conjunction with the 40 years of Star Wars Celebration, that it would be launching a series of animated shorts following their incredible heroines on Disney YouTube, called Star Wars Forces of Destiny. The series, which is set to launch in July, will feature two- to three-minute long shorts that dig deep into the personal histories of all our favorite Star Wars heroines — as well as some who might be less recognizable to the masses.

Princess Leia, Rey, and Jyn Erso will all be covered (with Rey and Jyn's characters being voiced by Daisy Ridley and Felicity Jones, the actresses who played them in Star Wars: The Force Awakens and Rogue One), but expect to see other great heroines like Sabine Wren and Asoko Tano. Lupita Nyong’o, who voiced Maz Kanata in Star Wars: The Force Awakens, will act as the narrator of the series.

Carrie Beck, executive producer of the new animated shorts, told Entertainment Weekly that the characters might be living in different timelines, but this is all official Star Wars canon:

One of the opportunities here was to tell the stories in between the larger moments and imagine some of the ways our characters have crossed.It’s all part of the larger swath of storytelling.

Beck also shared the good news that the heroines, who may meet on occasion, won't be lifted out of the Star Wars universe for the sake of a good story arc:

Now can we talk about the toys?