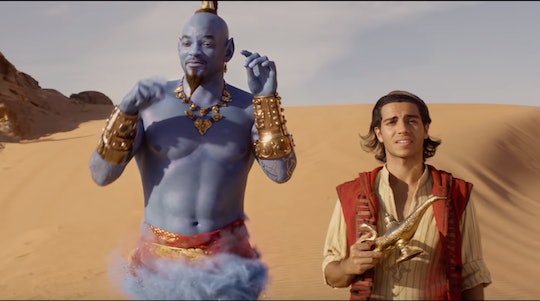 Kids and adults alike will likely be delighted to know that Disney is making a live-action Aladdin sequel. But don't start a countdown just yet; it's still in early development. Variety reported on Tuesday that Disney is in the process of developing a follow-up to the live-action version of Aladdin, which hit theaters last year.

The film is reportedly still in such of early stage that a script isn't even complete, but film writers, John Gatins and Andrea Berloff, are reportedly on board to pen the sequel, according to Variety. The film will also reportedly be in theaters, rather than go straight to release on Disney's streaming service, Disney+. Other than this, not much else is known about the reported sequel. Romper has reached out to Disney for further comment.

It's likely that Disney fans won't know anything about the sequel until the D23 Expo — Disney's bi-annual convention where major announcements are made about films, sequels, and projects in the works — which will be held later this year. The live-action remake cast was revealed at D23 in 2017, so more updates could come with the convention this year. Until then though, it looks like folks on Twitter are excited about the possibility of getting an Aladdin sequel.

The original 1992 animated film did inspire some direct-to-video sequels. In the 1994 film, Aladdin and the Return of Jafar, Aladdin's nemesis returns to shake things up in his life. In the 1996 film, Aladdin and the King of Thieves, Aladdin and Jasmine's wedding is ruined by a group of thieves and he goes to find his long lost father. But according to Variety, it's unlikely that these sequels will have any influence on the new film, which will reportedly be "completely original."

In the meantime, you can stream the live-action Aladdin on Disney+.